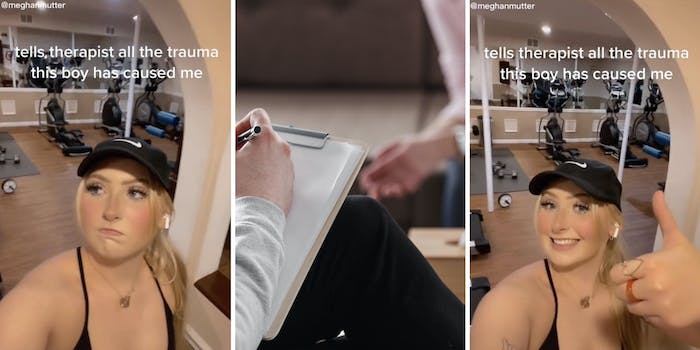 ‘She was trying to put herself in your shoes’: TikToker says her therapist slept with her boyfriend after telling her about their problems

'The way my jaw dropped.'

In a viral TikTok, a woman says her therapist allegedly slept with the man she was seeing.

Meghan Mutter (@meghanmutter) posted the TikTok on Saturday. In the clip, Mutter is in the gym and the text overlay reads: “Tells therapist all the trauma this boy has taught me. She sleeps with him.” As of Monday, the TikTok has nearly 400,000 views.

@meghanmutter my life is a joke at this point #TopGunMode  #viralsound #viral ♬ the joke is on you. icarly – Kate

In the comments, viewers shared their shock at the situation. “When I say I GASPED…,” one viewer said.

“The way my jaw dropped” another wrote.

“She was trying to put herself in your shoes,” a third user commented.

Several users begged Mutter for a story-time video to explain more details. She has yet to create any follow-up videos offering additional details.

Some argued that the therapist must have slept with the man unintentionally, not knowing that the pair were involved.

“Theres no way she did it knowing it was him though right? Like i dont show my therapist a picture of my ex it just has to be a coincidence 😭,” one viewer wrote.

Others said they didn’t believe Mutter’s story. “I don’t believe this 😳 or at least i don’t want to,” one user said.

Some commenters said the situation “feels illegal,” while others said she should take her therapist to court.

According to the American Psychological Association’s Ethical Principles of Psychologists and Code of Conduct, psychologists are supposed to refrain from relationships that could reasonably be a conflict of interest. It is also noted that therapists should not “engage in sexual intimacies with with individuals they know to be close relatives, guardians, or significant others of current clients/patients.”

Breaking this code of ethics doesn’t mean the therapist can be sued, but it does mean they could likely lose their APA membership.