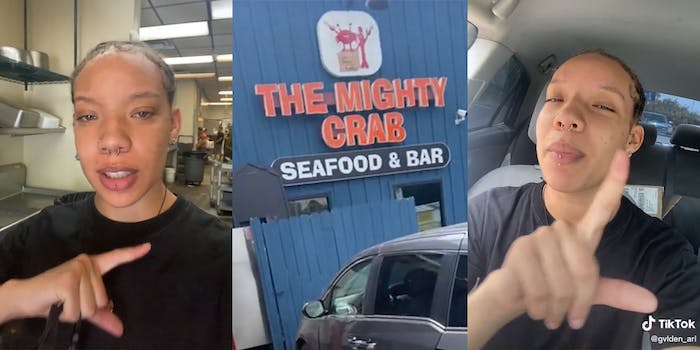 ‘They use sausage to catch these motherf*cking rats in here’: Restaurant worker ‘exposes’ workplace before allegedly getting fired

'I'm literally going to go on an exposing rant until I get fired.'

A restaurant employee said she was “going to go on an exposing rant until I get fired” in a viral video about her manager and the restaurant where she worked.

“I’m to the point where I’m so fed up with this motherfucking job,” Ari (@gvlden_ari) says in the video, which was posted on May 14. The video garnered 1.5 million views on the platform, where some viewers are chiming in about the local restaurant.

Ari says she is stressed and almost had a panic attack due to her manager. Ari says her manager at a regional restaurant chain called The Mighty Crab took away a table of 15 guests @gvlden_ari was expecting to have as part of her rotation.

“It’s like she only be wanting to see certain motherfuckers win and that shit is so fucking aggravating,” Ari says in the video.

@gvlden_ari When I say FED UP, FED TF UP ‼️ im going to post a pt. 2 so I can really get into it #shittyjobs #shittyowner #shittymanagers #narcissist #exposingthetruth #viral #fyp #xyzcba #xyzbca ♬ original sound – Arii

“I would quit, but I’m fixing to expose this bitch. I really hope this shit go viral,” Ari continues. She says she’s going to post TikToks in an attempt to expose the restaurant.

“I’m fixing to go in there and show y’all the motherfucking rat traps,” she adds before alleging the manager denied the location has a rat problem.

With the last 30 minutes of her shift, @gvlden_ari films the rat traps allegedly located in the Little Rock restaurant.

“Y’all see that shit?” she says. “They use sausage to catch these motherfucking rats in here. The own food that they serve to y’all, they use that shit to catch in here.”

In a follow-up video, Ari captures the moment another employee walks out on the job. Ari says the manager is the reason why the worker quit.

Ari alleges that she got fired and escorted from the premises by police. “She waited til the end of my shift to fire me, y’all,” Ari says. “She had the police escort me out. … She let me work a whole, full shift. … She let me serve my tables and didn’t let me get my tips from them.”

The initial video seemingly found its target audience in Little Rock, as some commenters shared their alleged previous experiences working at the restaurant.

“Unfortunately we had the same experience working for them as well,” TikToker Tamiya Janeé wrote. “It’s like they’re programmed to provoke then play victim when you check them!”

“I live in Little Rock Arkansas and I worked at the mighty crab on University and I totally hated it [the manager] is literally the worst manager,” another viewer, Mackenzie Young, said. “I quit twice!”

Some viewers even left bad Google reviews for the restaurant based on Ari’s video. “Y’all better start giving the one star reviews,” one urged.

“[The manager] is disrespectful to her employees and they all end up quitting because of her,” one person wrote in a recent review. “They also have rats and its very unsanitary in there.”

“The manager … refused to remove the rat trap under my table,” another review reads.

The Daily Dot has reached out to Ari via Instagram direct message as well as to The Mighty Crab via Facebook message.