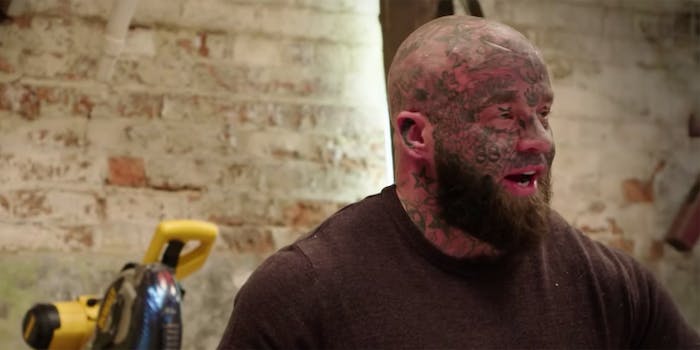 One of Darren Lumsden's tattoos is the number 88, which can symbolize 'heil Hitler.'

The Sky History channel temporarily axed its woodwork talent show The Chop after viewers alleged that a contestant’s tattoos are symbols of neo-Nazism and white supremacy.

The Chop: Britain’s Top Woodworker, hosted by Rick Edwards and comedian Lee Mack, features 10 of the country’s “best carpenters, carvers and woodworkers” competing in a series of tasks. Think The Great British Bake Off for wood projects.

The first episode aired last week, but the series was halted indefinitely as the network plans to investigate contestant Darren Lumsden, who is covered in tattoos as far as viewers can see. And viewers didn’t like what they saw.

At least three of Lumsden’s tattoos are of numbers commonly associated with neo-Nazi code and white supremacist messages. The number 88 is tattooed on his right cheek. Because the letter “H” is the eighth in the alphabet, “88” is considered the numerical version of “heil Hitler,” according to the Anti-Defamation League.

The numbers 23 and 16 tattooed on Lumsden’s temples are often used to denote “white power,” the Anti-Defamation League says. Some viewers also noted the “homegrown” tattoo on Lumsden’s upper lip, which could be interpreted as a nationalistic sentiment.

All of the problematic tattoos are on Lumsden’s face, and some viewers pointed out that he always appears in clothing that covers his arms and legs on the show. Other contestants wear tank tops and shorts while doing physical labor.

Viewers called for Lumsden to take off his shirt, implying that he could have more questionable tattoos on the rest of his body.

Sky History addressed the concerns on Twitter, stating that Lumsden was properly vetted and that his tattoos carry deeply personal meanings. The tweet has since been deleted, and the company tweeted again on Tuesday saying that it will not broadcast any episodes of The Chop until the investigation is concluded.

“Sky HISTORY stands against racism & hate speech of all kinds,” the tweet said. A&E Networks, which runs Sky History together with Comcast, issued a similar statement to Deadline.