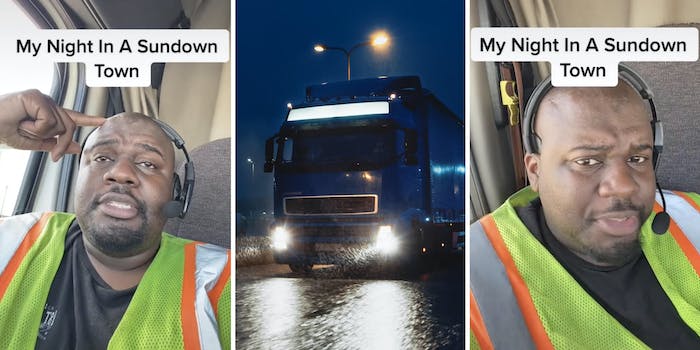 'I’ve always been told, 'Don’t even stop for gas in Vidor, Texas.''

A Black truck driver on TikTok known as Gideon reveals in a viral video what he witnessed last week while traveling through a “sundown town.”

The video, which has been viewed nearly 800,000 times since posting, details the man’s experience while visiting the notorious town of Vidor, Texas.

Vidor was once considered a haven for the Ku Klux Klan and has long been seen as a “sundown town,” a predominately white area that is considered unsafe for Black people after sunset due to racial violence. Although city officials have claimed that the town has undergone significant changes in recent decades, Gideon’s experience reveals that some things still haven’t changed.

“Pretty much everybody I know in Texas that’s Black tells me, ‘Do not go to Vidor, Texas,'” Gideon says. “I’m like ‘OK’ but here I was in Vidor, Texas.”

The TikToker goes on to state that while driving to his destination to drop off his load, he came across numerous trailer parks with Confederate flags and even a doll of a Black man hanging from a tree by its neck.

Upon reaching his destination, Gideon says that he was approached by a security guard who immediately alerted his fellow workers that they were experiencing a “code red.” The security guard expressed that he did not want to be responsible for the truck driver’s safety by allowing him to drive further into the business to drop off his delivery.

Gideon says another man eventually appeared about 15 minutes later to quickly help him unload his truck before urging him to leave the area.

“He said, ‘Dude, you might want to get up out of here as soon as possible. We’re at sundown. You want to leave now.'”

After asking the man if he could rely on the police, Gideon was allegedly told that local law enforcement would “turn a blind eye” to any potential incident. The TikToker says he drove until he reached the next town over where he fell asleep in his truck with an AR-15 rifle. His account of the visit was made the following day after he felt he was safe.

The Daily Dot reached out to Gideon to inquire further about the video but did not immediately receive a reply.

Comments under the video were filled with remarks from other residents of Texas who were similarly aware of the town’s reputation.

“POV: You’re from TX and knew he was talking about Vidor before he said it,” one user wrote.

“I’ve always been told don’t even stop for gas in Vidor, Tx,” another added.

Some users even argued that a new “Green Book” was needed, a reference to the annual guidebook designated safe destinations across the country for Black Americans between 1936 and 1966.

“We need an updated Green Book,” one viewer commented.

Many were simply shocked to hear that such areas still existed in the country.

“Wow,” one commenter added. “I hate that there are places in our nation that are still this racist.”

At least one alleged resident of Vidor even left a comment regarding the town’s poor image.

“Not everyone in the town is like that… but it is the ones who are like that that ruin everyone else’s reputation… I live in Vidor myself,” the user wrote.

The experience came as an unpleasant surprise to many, but countless others have long been aware that such dangers remain ever present.