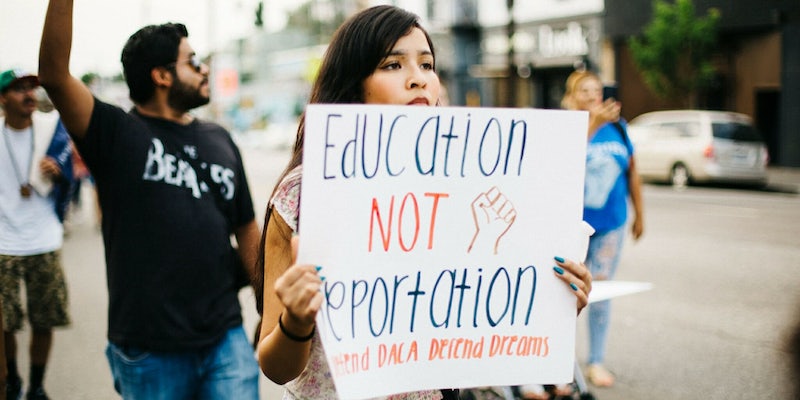 7 states are suing the Trump administration to end DACA program

Texas is leading the charge.

Texas Attorney General Ken Paxton has filed a lawsuit against the Trump administration over the continuation of the Deferred Action for Childhood Arrivals (DACA) program.

The suit, filed on Tuesday, represents Alabama, Arkansas, Louisiana, Nebraska, South Carolina, Texas, and West Virginia, and names the Department of Homeland Security and encompassed agencies as the defendants. Paxton first threatened to sue last June if the federal government hadn’t ended the program by September.

On Sept. 5, Attorney General Jeff Sessions announced the end of Obama-era program on the basis of it being “unconstitutional.” The DACA program allows immigrants who came to the U.S. as children to work in the country legally without the threat of deportation. The announcement gave DACA recipients 30 days to renew their two-year permit and ended new applications from DACA-eligible immigrants who had yet to apply to the program.

Sessions also gave Congress six months to find a pathway to citizenship for DACA recipients. In that time, two federal judges issued injunctions to Trump’s decision, ordering the program be restarted for current and former DACA recipients to renew their statuses while lawsuits against the administration’s move to end DACA played out in courts. The Supreme Court rejected the Justice Department’s request to immediately hear its appeal, allowing the lower court rulings to stand.

In January, Paxton came back saying he would consider suing if DACA still existed this June. Then last week, a third federal judge ordered the Trump administration to reopen the program to first-time applicants.

“Our lawsuit is about the rule of law, not the wisdom of any particular immigration policy,” Paxton said in a press release, according to the Texas Tribune. “Texas has argued for years that the federal executive branch lacks the power to unilaterally grant unlawfully present aliens lawful presence and work authorization.”

Texas has the second-highest population of DACA recipients. According to the Mexican American Legislative Caucus, Texas would lose more than 100,000 people from the workforce and nearly billions of dollars in GDP if the DACA program were to end.

Texas and 25 other states previously sued to block a similar program in 2014, called the Deferred Action for Parents of Americans and Lawful Permanent Residents program, commonly referred to as DAPA, which would have protected 5 million undocumented immigrants from deportation.

“The vast majority of the American people support the Dream Act, but Republicans blocked it in Congress. The vast majority of people also support immigrant youth, but Trump killed DACA and then he obstructed solutions to fix it,” Greisa Martinez Rosas, deputy executive director of United We Dream, the country’s largest youth-led immigrant community, said in a statement. “It is clear that Republicans will try everything possible to achieve their goal of mass deportation. Now they are trying to stop all immigrant youth who are able to renew their DACA protections.”