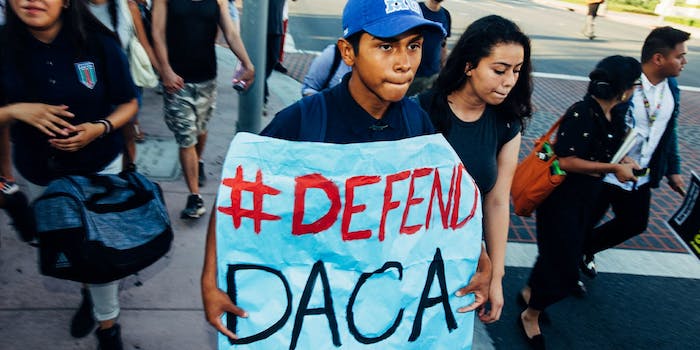 DACA is far from dead.

The Trump administration’s six-month attempt to shut down the Deferred Action for Childhood Arrivals (DACA) program has been further blocked by an order to reopen the program to new applications.

On Tuesday, a federal Judge John Bates overruled President Donald Trump‘s efforts to end the immigration program, stating that the administration’s ending of DACA in September was “arbitrary and capricious.” Bates stated the Department of Homeland Security didn’t “adequately explain its conclusion that the program was unlawful,” adding that the government provided “meager legal reasoning” to support its move to end DACA, according to CNN.

The move follows two other federal judge orders earlier this year to reinstate the DACA program. However, this is the first ruling that will allow eligible recipients who haven’t before been a part of the program to apply for its benefits—the ability to work legally in the United States and remain in the country without threat of deportation.

While Bates ordered the program’s reopening for new applications, the ruling won’t immediately go into effect. Bates delayed the ruling for 90 days to allow the Trump administration to make its case justifying DACA’s ending in a new memo.

Bates’ decision stated that the government’s “barebones legal interpretation was doubly insufficient,” given that over 700,000 people are protected under DACA. Bates also argued that the Justice Department’s reasoning that DACA would have been found unconstitutional in local courts, and therefore is unconstitutional, “was so implausible that it fails even under the deferential arbitrary and capricious standard.”

A spokesperson for the Justice Department said in a statement that the department stands by its original reasoning, and will continue to defend its decision.

“The Department of Homeland Security therefore acted within its lawful authority in deciding to wind down DACA in an orderly manner,” spokesperson Devin O’Malley said in a statement. “Promoting and enforcing the rule of law is vital to protecting a nation, its borders, and its citizens. The Justice Department will continue to vigorously defend this position, and looks forward to vindicating its position in further litigation.”

An estimated 50,000 renewals have been issued since the Department of Homeland Security reopened renewal applications in February. The Supreme Court has since refused to fast-track the case for the Trump administration.

In March, a third federal judge in Maryland ruled that president Trump had a right to end the DACA program. The judge ruled that, assuming that the Trump administration reasonably believes that the Obama-era executive action was unlawful, Trump did nothing wrong in “trying to avoid unlawful action,” and that his actions were not “arbitrary and capricious.” However, he also called for Congress to act to protect Dreamers, the thousands of immigrants who arrived in the U.S. as children.

“The result of this case is not one that this Court would choose if it were a member of a different branch of our government,” Judge Roger Titus wrote. “An overwhelming percentage of Americans support protections for ‘Dreamers,’ yet it is not the province of the judiciary to provide legislative or executive actions when those entrusted with those responsibilities fail to act.”