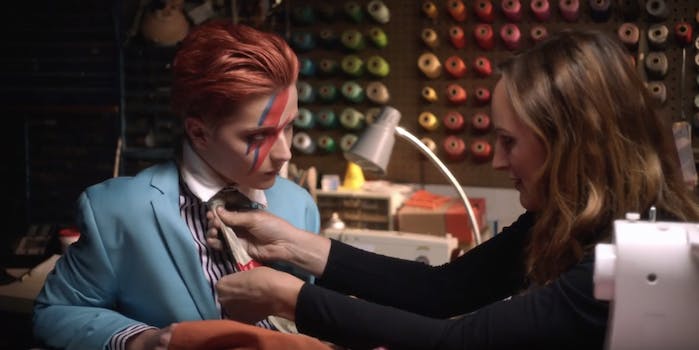 Prince and David Bowie are resurrected, and all is good.

Hot, talented lesbian twins Tegan and Sara stepped out of the spotlight for their new video to make room for LGBT and gender-nonconforming youth.

The video, for the song “Faint of Heart,” features a crop of young trans and queer social media stars including Tyler Ford, Ella Giselle, Dominic Ravina, Olabisi Kovabel, Cooper Treibel, Eli Erlick, and Ni Ching-Marino. The LGBT youth (some of whom are still in their teens) pay homage to musical icons like Prince, David Bowie, Madonna, and Elvis—as well as a couple dressed as the Quin sisters themselves.

Also appearing in the video are the stars of the Emmy-nominated series Her Story. Jen Richards and Angelica Ross, both out-transgender actresses, play the moms of two of the youth—helping them sew costumes and get ready for a faux version of Lip Sync Battle.

.@teganandsara @alohadevon @SmartAssJen THANK YOU for including us your music video! The music, lyrics & images go straight to the heart❣

As the musical duo told Teen Vogue, which premiered the new video on Thursday, the shoot just happened to take place the day after the Orlando shooting that claimed the lives of dozens of LGBT clubgoers this June.

“There was something very personal about this tragedy and that was undoubtably on our minds as we arrived on set,” Tegan told Teen Vogue. “From the second we walked in, I felt incredibly emotional.”