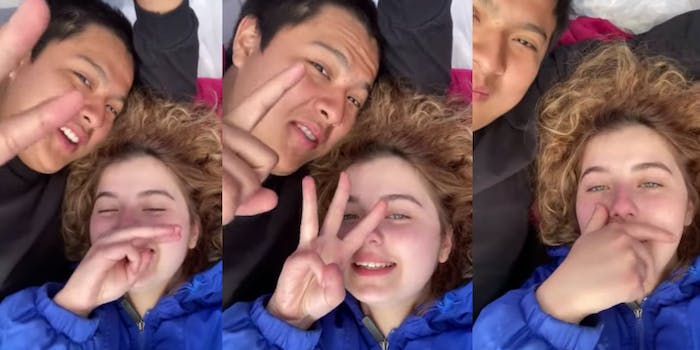 'Welcome back to our YouTube channel: day three after murdering somebody.'

Two Nevada teenagers allegedly fatally stabbed one of their parents. In a video, they talk about murdering someone.

Aaron Guerrero, 18, and Sierra Halseth, 16, were arrested and charged with murder, according to Insider. The couple allegedly fatally stabbed Daniel Halseth, who is Sierra Halseth’s father. Daniel Halseth’s body was reportedly found on April 9. After he was allegedly stabbed, he was reportedly burned in a house fire, which police, according to Insider, believe the teens set.

Court documents reviewed by the Las Vegas Review-Journal indicate the couple had plans to run away together, prompting their parents to forbid them from seeing each other.

According to the Review-Journal, the two were caught on a surveillance camera buying a saw, bleach, lighter fluid, and disposable gloves. On the saw the pair bought, police reportedly found “apparent blood and tissue.”

Halseth and Guerrero allegedly fled to Salt Lake City, where they were stopped by police, who found a bloody blanket in the trunk of their car.

In a video found on one of the teens’ cellphone, Guerrero and Halseth talk about murder, saying, “Welcome back to our YouTube channel: day three after murdering somebody.”

It’s unclear if the video was actually intended for YouTube; it has since been shared online.

“It was worth it,” Guerrero says.

Guerrero and Halseth reportedly face eight additional charges. They have since been extradited back to Las Vegas, and their first court appearance is slated for Monday. While Halseth is too young for prosecutors to seek the death penalty, it is reportedly being considered for Guerrero.

The Daily Dot has reached out to the Las Vegas Metropolitan Police Department.