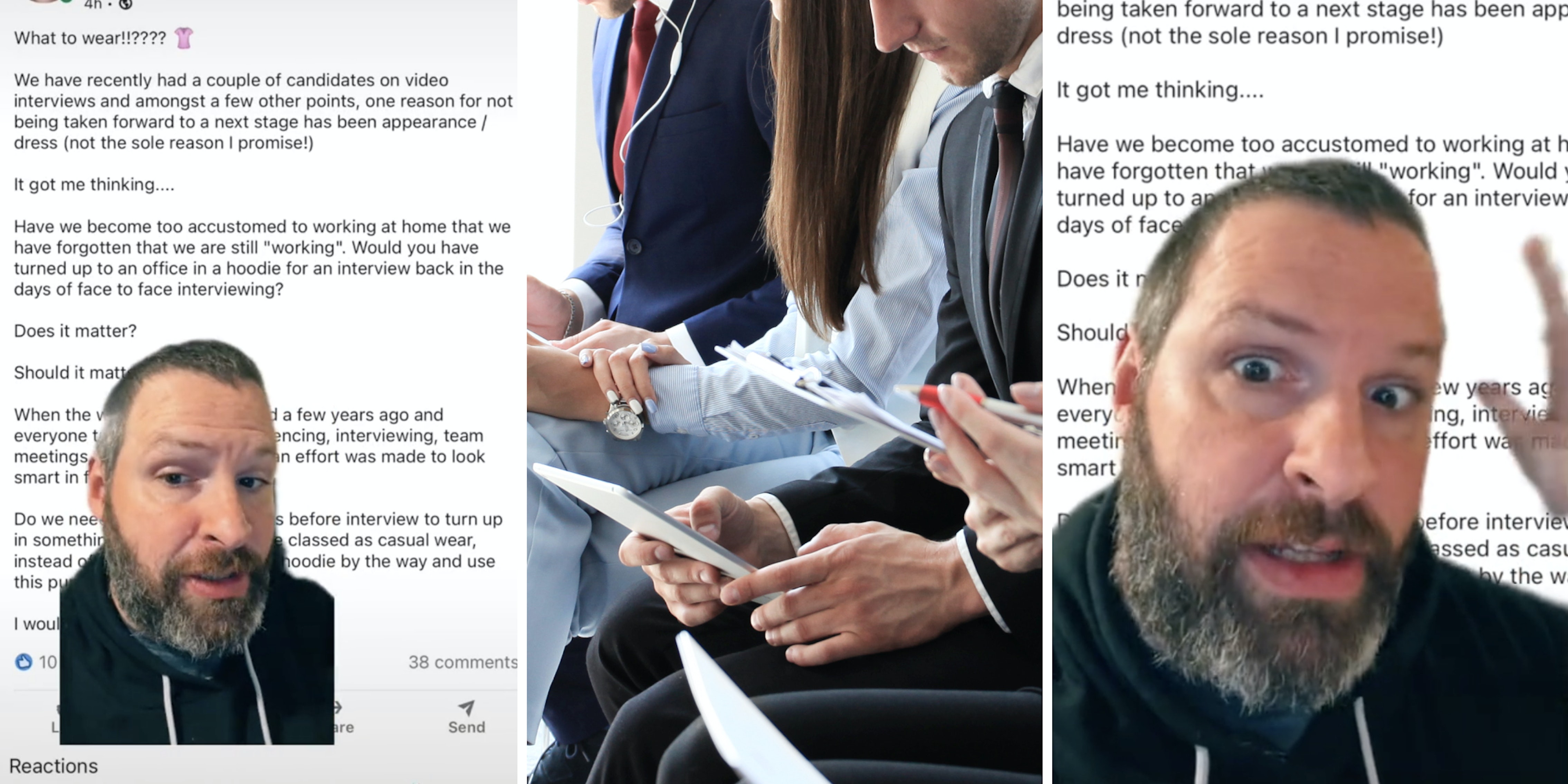 ‘We’re not back in the day anymore’: Recruiter on LinkedIn says people shouldn’t wear hoodies to Zoom interviews, sparking debate

'A nice suit would show that you care about the job.'

A tech recruiter’s LinkedIn post sharing that a reason a candidate didn’t move forward was that they wore a hoodie to the video interview is sparking a debate online.

People are in disagreement over whether or not the expectation to dress up for interviews is “out of touch.”

Daniel Space (@dan_from_hr) posted a TikTok sharing the LinkedIn post on Friday. In the clip, he says: “A recruiter right now is getting blasted on LinkedIn because of this post. In her LinkedIn post, she said one of the reasons one of the candidates didn’t move forward—not the sole reason—is because they wore a hoodie during the Zoom interview. There are a few people in support saying that an interview is still a business meeting and you should dress appropriately, but a lot of people are saying this is wildly out of touch.”

Behind him is a screenshot of the post by the recruiter, Louise Ogilvy. According to Ogilvy’s LinkedIn profile, she’s based in the United Kingdom and recruits for tech startups.

In the post, Ogilvy wrote: “Have we become too accustomed to working at home that we have forgotten that we are still ‘working’. Would you have turned up to an office in a hoodie for an interview back in the days of face to face interviewing?”

“When the world went a little mad a few years ago and everyone turned to video conferencing, interviewing, team meetings, I do feel that more of an effort was made to look smart in front of the camera. Do we need to remind candidates before interview to turn up in something smart that would be classed as casual wear, instead of hoodies (I love a good hoodie by the way and use this purely as an example),” her post continued.

Other LinkedIn users commented on her post, with some disagreeing. “If you are someone who puts that much value and weight into a clothing choice – wow. I’m sorry. I wouldn’t trust you to place me in a job and I sure wouldn’t want to work for you. Dress codes and thoughts about others attire is not something I want to waste my short life worrying about.”

In the comments, Ogilvy clarified that this opinion “was more to do with interviews and not work from home,” adding that “it’s fairly typical to see software developers wearing casual clothes for sure!”

Others defended Ogilvy’s post. “There’s an old fashioned concept of respect and quite simply making an effort. If you are hoping for someone to ‘buy’ you then you have a responsibility to sell yourself well. I don’t think it’s too much to ask that someone packages themselves well and looks smart.”

On TikTok, most commenters on Space’s post disagreed with Ogilvy’s opinion. “She used the term ‘back in the day’ so she’s already out of touch. We’re not back in the day anymore. Let people wear hoodies.”

“I definitely see both sides! My skills and experience don’t change with a different shirt though…” commented another.

“A nice suit would show that you care about the job. If you’re wearing a hoodie the interviewer will think otherwise,” one TikToker wrote.

Space replied: “A nice suit can also show you don’t know the culture.”

At least one person brought up the Great Resignation, or the movement of power shifting from employers having the leverage to employees being unapologetic about what they want out of their work. In November 2021, a 20-year-record quit-rate was hit in the United States. A Pew Research Center survey of those who quit their jobs in 2021 found that most did so because “pay was too low,” there were “no opportunities for advancement,” and they “felt disrespected at work.” This has caused a high demand for workers and in turn, higher, more attractive wages or benefits.

The Daily Dot has reached out to Ogilvy for comment via email.