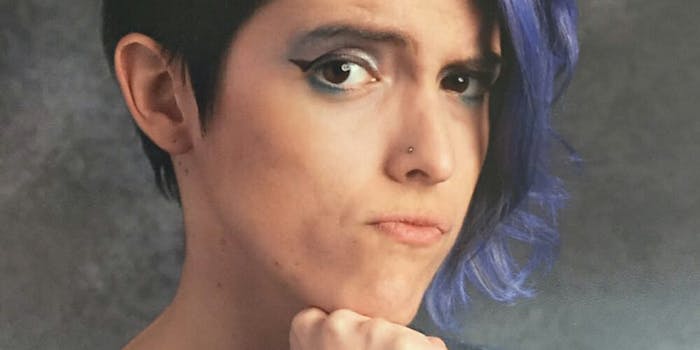 A Texas art teacher who was suspended from an elementary school in September after parents complained she was telling students about her sexual orientation has filed a lawsuit against the school district for discrimination, BuzzFeed News reported Tuesday.

The teacher, Stacy Bailey, says Mansfield Independent School District and two of its employees discriminated against her because of her sexual orientation after the district failed to reinstate her job at Charlotte Anderson Elementary School in Arlington where she had worked since 2008.

Bailey’s suspension came after she included a photo of her “future wife” in a slideshow introducing herself to students, and a parent complained she was promoting a “homosexual agenda.” MISD voted to renew Bailey’s contract in April but last week reassigned her to a high school in the district.

“Mansfield ISD reassigned Bailey to teach in a secondary school, sending the message that it believed LGBT teachers were not acceptable to teach elementary students,” a spokesperson for Bailey said in a press release.

In March, the school district said Bailey was suspended after it “received complaints from parents about Ms. Bailey discussing her sexual orientation with elementary-aged students.”

According to the lawsuit, a MISD official told the art teacher last fall that “you can’t promote your lifestyle in the classroom” and that parents complained Bailey showed “sexually inappropriate” photos to students, which she denies. The school district asked Bailey for her resignation in October, but she refused.

Bailey, whose lawsuit was filed in the Northern District of Texas federal court in Dallas, is seeking unspecified damages and to be reinstated to her job at the elementary school.