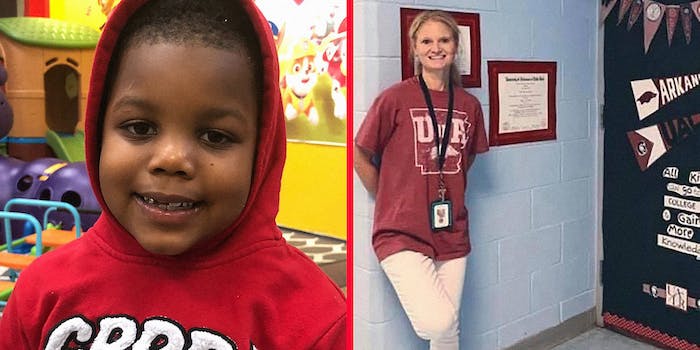 ‘She made me do it with my bare hands’: White teacher accused of making Black 5-year-old clean feces out of toilet

'My teacher made me get booboo tissue out of the toilet,' the 5-year-old recalls in a video.

People are crowdfunding for a 5-year-old Black student after his kindergarten teacher allegedly made him clean feces from the toilet with his bare hands, according to a GoFundMe set up for him.

The boy, identified only as Ashton, attends Crystal Hill Elementary School in Little Rock, Arkansas, where the incident reportedly took place on Friday, according to a statement posted to Facebook by the child’s grandmother, Tami Murry, on Tuesday.

“Ashton’s(my grandson) teacher made him put his hand in the commode and clean out his feces and tissue because he stopped up the commode,” Murray wrote, quoting the 5-year-old’s mother Ashley Murry.

“He is a young black male and this was done to degrade him, belittle him, and it will cause him to have anxiety, he keeps telling everyone what happened!!!” Murry wrote in the post, which has since been shared 2,500 times. “I am not stopping until this is handled properly!!!”

The teacher has been identified as one Karla Lasiter, who reportedly told Ashley she did not “have an explanation, she just knew she was wrong,” according to KARK. Lasiter has been placed on administrative leave.

“They basically made him go in the toilet and get his feces and the dirty tissue out of the toilet,” Ashley told KARK.

“You want a child to put their hand in there physically and clean out the commode- no no no no no. He’s not a janitor, he’s not a custodian, he’s not maintenance, no, not at all,” Tami said.

Mark Cannon, who started the GoFundMe fundraiser for Ashton, interviewed Ashton, Ashley, and Tami via Facebook Live on Tuesday.

“My teacher made me get booboo tissue out of the toilet,” Ashton tells Cannon in the video.

He says he asked Lasiter if he could use the restroom; once inside, she came in to check on him. She then reportedly made him clean the “booboo” tissue and feces out of the toilet.

“Did you have gloves on?” Cannon asks him.

Crystal Hill Elementary School has a majority Black student population, making up more than half the student body.

Lasiter is a full-time teacher and earns more than most others in the district. She was not reachable when the Daily Dot tried to contact her through her school phone number on Thursday.

On Thursday morning, Cannon shared another Facebook Live, saying he is in contact with Lasiter’s friend who told him that Lasiter and her family were advised by the Federal Bureau of Investigation (FBI) to leave town after her husband’s business began receiving death threats.

The Old Mill Pizza, reportedly owned by Lasiter’s husband, is currently under Yelp’s “Public Attention Alert,” which the food-rating app issues whenever an establishment receives a slew of reviews following an incident that puts it under public scrutiny.

In his video, Cannon says he previously called for people to boycott the restaurant and that 17 to 20 of its employees were terminated as a result of it having to shut down due to the threats.

“I never told anyone to make any threats toward Carla Lasiter, I said to boycott the business, and I still say that,” Cannon said in response. “As far as her employees not having a job — they owe that to her because had she never made that child do that horrible act, Old Mill Pizza would still be operating now.”

This is not the first such incident to be reported out of the school. The parent of another kindergarten student at Crystal Hill Elementary told FOX26 News that another teacher inflicted similar behavior on her daughter in the fall.

Her daughter was allegedly forced to pull toilet paper out of the toilet bowl with her bare hands after she used too much, the mother told FOX26 News on condition of anonymity.  “This is a common occurrence at this school it seems,” she said.

The school did not answer numerous calls from the Daily Dot on Thursday.

When reached for comment, Pulaski County Special School District said the incident is being investigated and directed the Daily Dot to its statement on social media but refused to answer any further questions. It remains unclear if the incident from the fall is also under investigation.

There was no statement available on the district’s Facebook page on Thursday afternoon; the elementary school’s page was not available on Facebook.

The GoFundMe was set up to help pay for Ashton’s counseling and to assist the family with legal assistance if they decide to take legal action.

“What is wrong with these people! A 5-year-old. Where was her humanity?” wrote one donor. “Please find a good lawyer and empty the pockets of this individual and entity. This is the only message that can be heard by individuals that would force a 5 year-old to do something so horrifying.”

“I read this story and couldn’t believe an education instructor would do this to a child,” wrote another. “I am utterly disgusted by her actions and I hope to goodness Karma comes back to haunt this witch of a woman.”

The donations surpassed its initial goal of $5,000 and are continuing to pour in.

The Daily Dot reached out to Tami Murry and Cannon, and will update this report if they respond.

Ashton says in Cannon’s video that the incident left him feeling “bad” about school. He also says that he wants to be a police officer or soldier when he grows up.