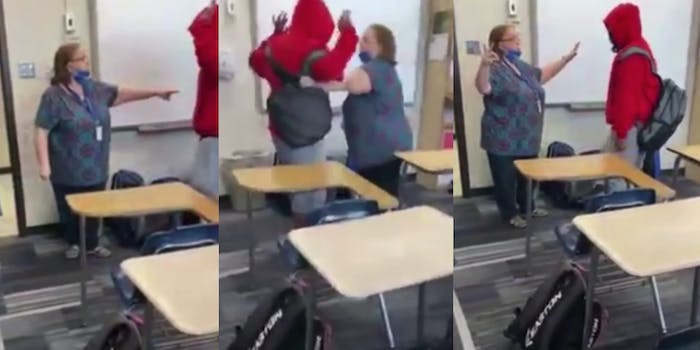 Teacher calls student the N-word, threatens to call police on him in video

The teacher was placed on administrative leave.

An Oklahoma teacher was placed on administrative leave after she was caught on camera calling a student the N-word.

At the beginning of the video, which was posted to Facebook, the student appears to be wanting to leave school. He is on the phone, telling the person on the other line he is going to “walk home.”

She then tries to physically stop him from leaving, first by grabbing him and then by holding him by his backpack. He puts his hands up while she is latched onto his backpack.

“Watch where you touch me,” the student tells her after breaking free.

“You better get yourself over there [N-word], do it!” she responds.

After she makes the racial slur, at least one student can be heard gasping.

“I asked you. I said, ‘What would happen if I said it?’ Right? And so, you didn’t think it was OK,” the teacher says, seemingly referring to her use of the slur after his apparent use of it.

In response, the student appears to grab the glasses and mask off her face and throws them to the ground.

“Call the police. Call the police,” she can be heard saying toward the end of the video, to which another student says, “I’m calling.”

It’s unclear if police responded to the incident. The Daily Dot has reached out to the local police department. Holdenville School District told News 9 in a statement that it “is fully aware of the incident,” which occurred on April 9.