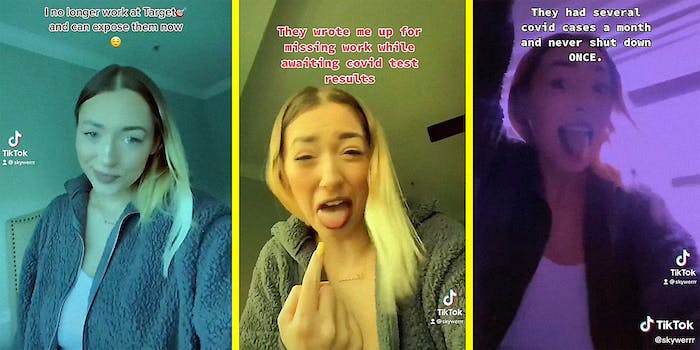 ‘I no longer work at Target and can expose them’: Viral TikTok takes retail giant to task over COVID safety

'I no longer work at Target and can expose them.'

The video was posted by @skywerrr, who claims to be a former Target employee. It appears, though, that the separation wasn’t entirely mutual, based strictly on the joyful shadiness she brings to the flashy video.

The caption, if there’s an additional indication of the tone, reads: “Target, you literally were the worst job I’ve ever had… #corporationssuck #corporateamerica #target #fyp #iquit.”

“I no longer work at Target and can expose them,” she wrote in the overlay. The video has more than 375,000 faves on TikTok.

The most damning accusation was related to coronavirus exposure: “They had several COVID cases a month and never shut down once.”

If true, the allegation could expose the corporation to a vast, costly legal quagmire with both employees and shoppers. There have been similar past concerns for the well-being of Target employees. As the Guardian wrote last year: “Employees say they are anxious about working in crowded stores with inadequate sanitation and lack of paid time off.”

However, and unfortunately for Target fans, there’s more.

She claims she was written up for being late while awaiting a COVID test result. She also alleges that Target does not accept doctor’s notes and that absences from work are counted against the employee, “no matter urgency of the situation.”

Lastly, she claims that undercover security follows people around in the store.

The TikToker could be describing a number of retail jobs across America and beyond. Corporations like Target and Walmart have been criticized for bad worker welfare.

The TikTok video comments are divided, with some saying it could simply be the specific location that employed her. One woman claimed she once suffered from kidney stones. “They wanted me to work, but I was in the hospital, and [Target] made a big deal.”

The Daily Dot has reached out to Target for comment.