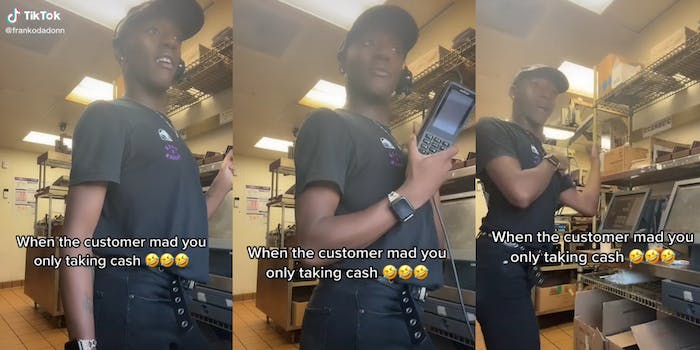 ‘Meet me in the parking lot’: Taco Bell drive-thru customer berates worker for having to pay cash when the card reader is down in viral skit [UPDATED]

'People just don’t understand it don’t be our fault!'

A Taco Bell worker shares a skit of him fighting with an angry drive-thru customer who complains that the location only takes cash when the card reader was down, sparking debate in the comments.

In the video posted by TikToker Franco (@frankodadonn) on Monday, he shows a clip of him talking to a “customer” in the Taco Bell drive-thru. The text overlay reads, “When the customer mad you only taking cash.”

In the clip, the “customer” asks, “Why every time I’m fucking here you only take fucking cash?”

The “customer” says she doesn’t have cash and continues to berate Franko, to which he responds, “Meet me in the parking lot,” and takes off his headset.

The skit has garnered over 10.1 million views as of Wednesday, with commenters discussing their experience with rude fast-food customers in the comments.

“People just don’t understand it don’t be our fault!” one user said.

“NO WHEN I WAS WORKING AT MCDONALD’S PPL WOULD GET SO PRESSED ABOUT US ONLY TAKING CASH,” another wrote.

“[I swear to god] I work at Taco Bell and it be JUST LIKE THIS,” a third added.

Other commenters speculate that the interaction was a skit, which Franko confirmed in a follow-up video.

“Lol folks don’t understand how skits work. You can tell this is acting cause in the real moment they definitely would had jumped through the window,” one user wrote.

“I know this is a joke,” another said.

In the follow-up video, Franko explains that the woman in the video was his co-worker and that it was “just a joke” in response to a commenter who said he was being “extra.”

“It’s called acting,” Franko says. “It’s not that serious girl, this is TikTok.”

The Daily Dot reached out to Franko and Taco Bell via email.

“We take customer experience and safety in restaurants very seriously and we have been informed by the franchise owner and operator of this location that this interaction was staged between two team members. The owner and operator is handling this situation pursuant to its policies”. – Taco Bell Corp.