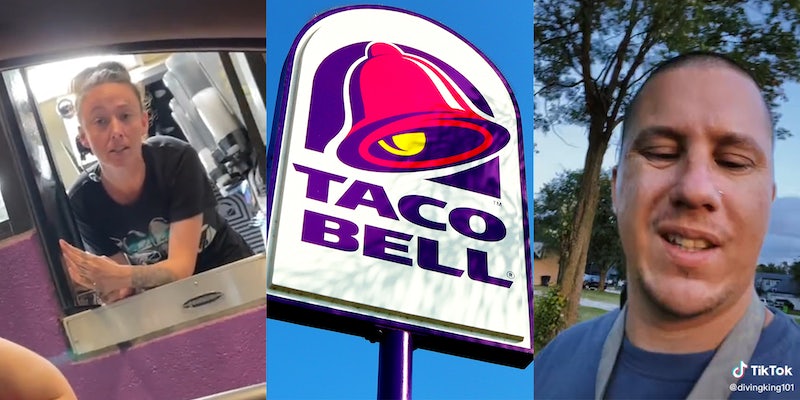 Customers confront Taco Bell worker, urge her to ‘keep the same energy’ she had over the phone. So she does

'Y’all act like these fast food workers be caring about y’all feelings.'

Social media is littered with filmed interactions between customers and employees. Judging from some of these clips, it appears that many whip out their smartphones in an attempt to gather “evidence” they were the ones who were wronged.

Sometimes that may backfire.

In a now-viral TikTok posted by Ant, a TikToker who uploads under the username @divingking101, many people seem to be siding with a Taco Bell employee who used foul language with a customer—even if the 20-second uploaded clip seems to frame her as being in the wrong.

“Are you guys the mobile?” the Taco Bell worker asks through the drive-thru window as the customers in the car record.

“No, but hey listen, um, what was you saying on the phone again? I couldn’t hear you when I called?” the customer responds.

“Oh! Were you the one customer?” the employee says before the customer answers in the affirmative.

“No I told you I couldn’t understand you ’cause—” the worker begins.

“No, no what’d you say? Keep that same energy? What was you saying?” the customer says to her.

“I will. I will. … I just said take the dick out your mouth. That’s what I said ’cause I couldn’t understand what you were saying,” she says.

Many TikTokers sided with the employee in the comments section, stating there was most likely more to the incident than the 20-second TikTok clip shows. Others said that they felt like they’ve dealt with rude customers who “self-victimize,” while some were happy that the employee, indeed, “kept the same energy.”

“She kept that energy,” one said, with another claiming, “she won this for real.”

Some TikTokers couldn’t believe that the customer was offended by the Taco Bell employee’s remarks.

“Y’all act like these fast food workers be caring about y’all feelings,” one argued.

The old adage “the customer is always right” has a long and complicated history in the United States, and it’s a mindset that many argue contributes to patrons treating employees, especially those in the service industry, poorly.

However, in the wake of the pandemic, it appears that customer rudeness is at a high, and employees are becoming fed up. Understaffed restaurants have led to employees being overworked and this, coupled with an uptick in crumby customer behavior, and low wages (which are getting better, but still aren’t matching the rate of inflation), are responsible for employees quitting the food service industry en masse.

The Daily Dot reached out to Taco Bell via email and @divingking101 on TikTok.