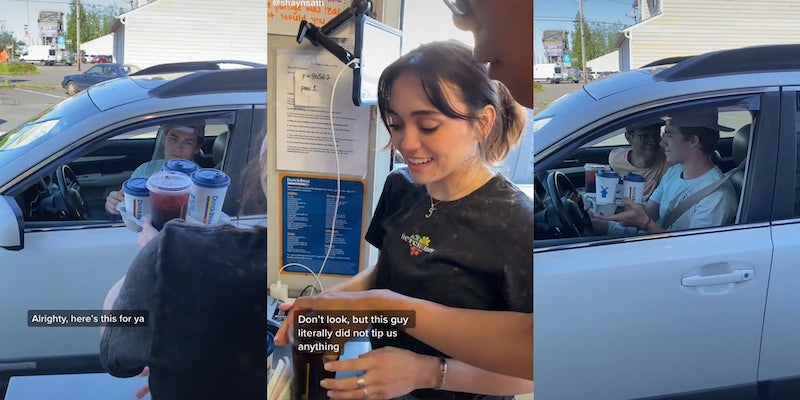 ‘What exactly are we tipping for?’: Dutch Bros drive-thru worker films ‘customer’ who didn’t tip them, sparking debate

'This guy literally did not tip us anything.'

Viral TikTok footage shows how a Dutch Bros employee reacted when a “customer” in the coffee shop’s drive-thru didn’t tip.

The footage was shared by TikToker Shayn Sath (@shaynsath), who appears to be a Dutch Bros employee. The video appears to be completely staged, but it sparked a debate among viewers nevertheless.

In the video, two employees man the store’s drive-thru window. One of them, with their back turned away from the window, says, “Don’t look, but this guy literally did not tip us anything.”

Then, that employee turns around and cheerfully hands the customer their order of four drinks. The other employee sneaks around the passenger side of the customer’s car, jumps in the front seat, and stares exaggeratedly into the customer’s face. The customer and employees appear to be friends who willingly agreed to film the video as a joke.

Joke or not, some viewers took the conversation about tips seriously. Some questioned why customers would be expected to leave a tip in a drive-thru.

“Imagine tipping a drive thru,” one viewer commented on the video.

“Who tips a drive thru,” a second viewer commented.

Some non-tippers said they don’t believe drive-thru workers do anything that merits a tip.

“What exactly are we tipping for?” one viewer asked.

Another viewer wrote, “I only tip people who bring stuff to my table or to my home. In a takeout or drive-thru situation, sorry folks.”

“That’s why you get an hourly pay,” someone else said, aiming to explain why they do not tip drive-thru workers.

However, other viewers said drive-thru workers do actually deserve tips.

“For all the people commenting ‘why tip a drive thru’ bc it gives them a little extra in their paycheck. bc they work hard. bc its nice and deserve it,” one TikTok user said.

Another user, who claimed to be a Dutch Bros employee, said, “as someone who was trained under dutch they’re trained to be the only company who still does customer service that’s why you tip.”

In a comment on the video, the TikTok creator shared their stance on tipping: “Remember, tipping is totally optional!”