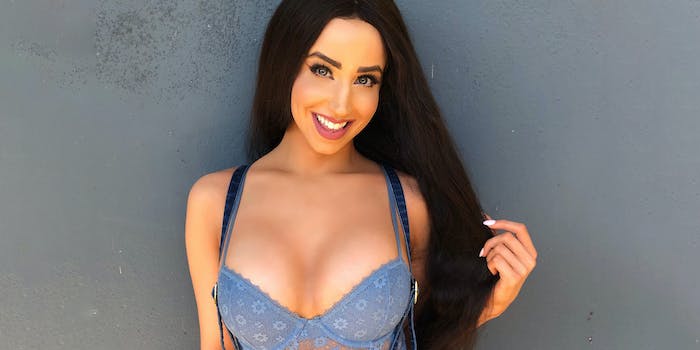 An OnlyFans content creator says her ex mocked her by suggesting she join OnlyFans during their breakup in 2020. So she did, and now she’s in the top 0.6% of earners on the platform, according to LADBible.

Syd Wilder, who has more than 2 million followers on Instagram, joined OnlyFans after the entertainment industry came to a halt during the coronavirus pandemic.

“I never wanted to join OnlyFans. It was very frowned upon in the entertainment industry,” she told the Daily Dot, adding that you could be “marked” if you had any affiliation with the platform.

She said her now-ex would mock her by telling her to join OnlyFans because he was not happy with the content she was sharing on Instagram.

“When the entertainment industry shut down, I was like, ‘OK, well I will,” she said.

A former comedian who moved to Los Angeles at 16 to study at the American Academy of Dramatic Arts, Wilder says she has done sketch comedy and that her work has been featured in Cosmopolitan, Funny or Die, Comedy Central, and Huffington Post. She also worked as a model. All of that, however, came to a halt during the pandemic.

When she first started her OnlyFans account, she said she wasn’t sure how it was going to go. But today, she has almost 44,000 followers on her OnlyFans, where she offers content ranging from episodes of Uncensored Syd to NSFW content.

Her subscription rate is $20 per month.

Wilder’s knack for comedy shows up in her OnlyFans work. She recently put together a collage of all the unsolicited d*ck pics men have sent her.

“I was like, I want to make money off of this,” she told LADBible.

She began a d*ck pic “rating service,” charging $50 for a written rating and $100 for a voice note, according to LADBible.

She told the Daily Dot that she has mixed feelings about her success on the platform. “Somedays, I have a rewarding job and I get to help a lot of people through my interactions with people. Other days it’s hard,” she said.

She added that sometimes she still loses out on gigs in the entertainment industry because of her affiliation with OnlyFans. Wilder, however, remains grateful for the support she received on the platform and from her fans.