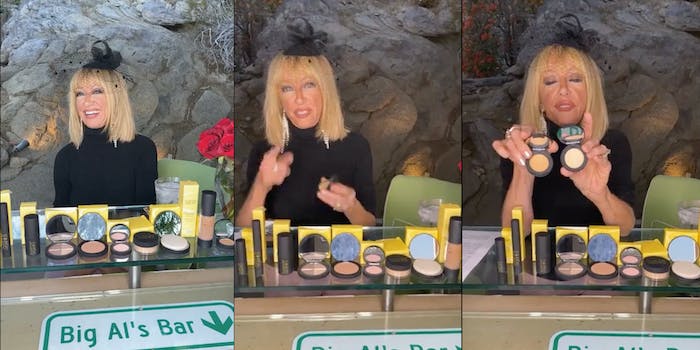 Actress was on Facebook Live when naked intruder entered her home

'You shouldn’t be here. This is our house.'

Actress Suzanne Somers was filming a Facebook Live video as an intruder entered her Palm Springs property on Friday.

The 74-year-old actress was filming a makeup tutorial when she sensed someone unfamiliar was on the grounds. While her husband, Alan Hamel, tried to reassure her no one was there, Somers then came face-to-face with the intruder—who remained off-camera during the video.

The actress greeted the man, who claimed he was scared of something. Somers later commented that the man wore, “flips flops or a bathing suit, or a biking,”

“I was slightly terrified over there for a second,” he said. When Somers asked why, he told her, “There were ghosts following me.”

Somers asked for his name, and the man identified himself as Aaron Carpenter before asking if she had ever heard of him.

“How did you get here?” Somers asked in the clip.

The man responded: “A friend led me up this hill, and then I came down.”

While remaining calm, Somers said, “You shouldn’t be here. This is our house.”

After Carpenter apologized for showing up, the couple advised him to leave the premises. Before he got escorted out, the intruder noted he brought the couple a “gift,” which they immediately refused.

In an interview with Page Six, Somers explained she was expecting dinner guests on Friday night after the Facebook Live session and assumed they arrived early. The couple also said that one of the fans watching her stream who lives in the area called the Palm Springs-area police.

Police later caught up with Carpenter and warned him not to wander into people’s private property.

On her remaining calm during the entire encounter, Somer said: “When things get crazy, you want to be around someone like me. But when it was all over, I was feeling my feelings.”