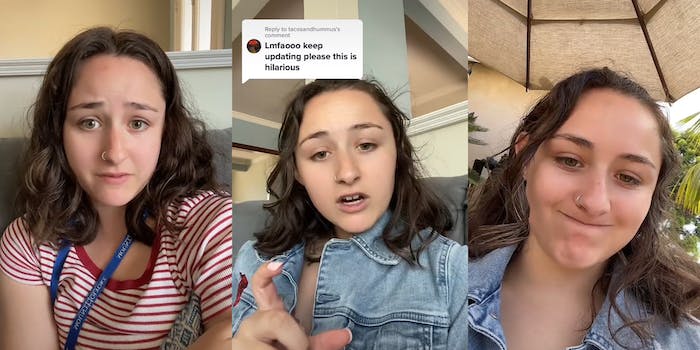 ‘I didn’t realize what the scam was until I ran into it’: TikToker says she was nearly scammed by a ‘sugar daddy’ on Instagram

'I decided to entertain one for funsies, just to see what would happen... Spoiler alert: It was a scam.'

Social media users posing as sugar daddies may not always be what they seem, as one TikToker learned in her experience entertaining the requests of a scammer.

In her video, user Kylie (@billyjoelsleftnut) says she encountered a scammer posing as a sugar daddy who sent her a check for $3,000, which she claims she deposited and expected to bounce. Then, the scammer reached out and asked if she could send him $1,000 to donate to an orphanage, but could not provide any information about the institution he had selected for his donation.

“You know those sugar daddy scammers on Instagram?” Kylie says in the video. “Well, I decided to entertain one for funsies, just to see what would happen, see if it would work. Spoiler alert: It was a scam.”

@billyjoelsleftnut Anyway I was panicking for a while but I think I’m ok now cuz it’s probably some dude in another country. #sugardaddy #sugardaddyscam ♬ Original sound – Kylie

The Federal Deposit Insurance Corporation has warned about fake check scams for years, as it is a common way of targeting people via mail. Targets are often told they have won a lottery or otherwise suddenly come into an amount of money. The goal, according to the FDIC, is to have the target send back an amount of legitimate money back, with the check never going through.

When Kylie became suspicious of the person who sent her the check, she withheld the funds he had asked for.

“I did not know that the check was fraudulent when I deposited it,” she says. “It wasn’t until after, when he started asking for money that I realized, yup, it was a scam. I wasn’t going to send money or give any of my bank account information.”

@billyjoelsleftnut Reply to @tacosandhummus I do regret putting this on the internet, but thank you to the people who were really sweet and reassuring, I got the answers I needed💕 #sugardaddy #sugardaddyscam ♬ original sound – Kylie

In a follow-up video, she says her bank has seen this type of scam before. She added in a comment that the initial $3000 amount has been removed from her account, and she isn’t in any trouble with her bank.

Viewers in the comments shared their own experiences of getting caught up in scams.

“I did this and almost got scammed,” one commenter wrote. “The check bounced and it was all good but scary.”

“It happened to me too with Bank of America and they told me I’m never allowed to bank with them again lmao,” another commenter wrote.

“I’m sad to say this happened to me,” a commenter wrote. “I had to go to the bank and explain myself.”

The Daily Dot has reached out to @billyjoelsleftnut via Instagram DM regarding the video.