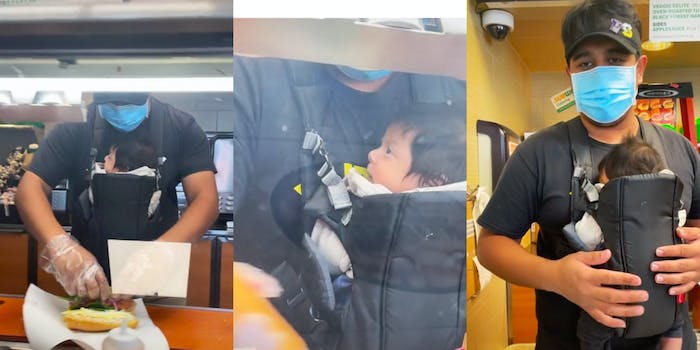 ‘If I saw this at a local Subway, I would not be bothered’: Subway worker makes sandwiches with baby strapped to chest in viral TikTok (updated)

'Can we normalize this?'

A TikToker posted a video of a Subway worker making a sandwich with a baby strapped to his chest. The video prompted a conversation in the comments section about childcare and worker expectations.

In the video, the creator stitched together clips of the worker preparing sandwiches as the baby calmly sits in the carrier. The TikToker used Reba McEntire’s “I’m a Survivor” to set the video.

The creator, Leslie Munoz, or @lesliemunnoz, posted the video on Saturday, and it’s garnered over 2 million views and over 354,000 likes since. The video also received thousands of comments, many of which make the assumption the man is the baby’s father. Munoz clears that assumption up in a follow-up video.

Replying to a comment that asked for the worker’s GoFundMe because “he deserves help,” Munoz said that she’s actually the parent’s baby. “I’m actually the single mom. Guy in the Subway video is a friend/old coworker who adores my son,” she commented.

One of the top comments on the initial video said, “If I saw this at a local Subway, I would not be bothered. Sometimes childcare falls through.”

“If he gets fired for this I’m fighting everyone at Subway,” another read.

Many of the comments were made in support of the worker having the child at work.

“Can we normalize this?” one asked. “There shouldn’t have to be a choice between taking care of the child and making money to care for the child.”

“As customers, we should be more accepting of children in the workplace,” another suggested.

Munoz also responded via videos to several viewer comments. One features her baby wearing a Subway visor after one person jokingly commented about outrageous job requirements.

Update 7:23 pm CT Nov. 10: In a statement to the Daily Dot, Munoz said that she used to work at the Subway in the video. She made “a lot of close friends” while employed there, and they love her child. During a recent visit, she asked her old co-worker to hold her baby while she ate.

“[The old co-worker] was so excited and strapped him on,” Munoz said. “He then proceed to make my sandwich, but as soon as a customer came in he was given back to me.”

She said she received a lot of positive feedback on the video, and the main critique was over the baby’s lack of a hairnet.

“I just thought it’d be funny if I got him making my sandwich on TikTok,” she said. “Hundreds of people made so many assumptions which was dope to see, how a video was able to start so many conversations. I myself am about to start work and don’t trust/afford a babysitter so it was interesting to see people’s opinions on this topic that I myself did not mean to start up.”