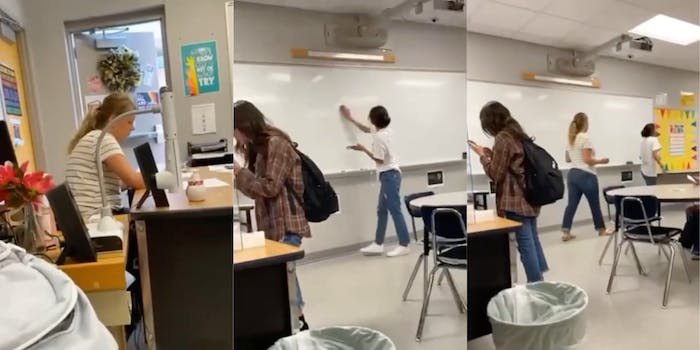 Video: Substitute teacher freaks out after Black student criticizes her for writing ‘all lives matter’ on whiteboard

A viral Reddit clip shows a white substitute teacher who has “all lives matter” written on her whiteboard freaking out after a Black student erases the board and challenges her ahistorical and racist notions of slavery.

The video was posted by u/The-Brixon to r/PublicFreakout, who also commented: “For context: Actual teacher has a Black Lives Matter sign in their classroom. A substitute took down the sign, then wrote “All Lives Matter” on the whiteboard.”

“Nothing bad has happened to a white person, ever?” questions the teacher before dipping into an asymmetrical and ahistorical screed.

“We’re not talking about that. I’m just saying straight up—were you a slave?” the student asked the white teacher.

“So I’d encourage you to check with your history and get that all straightened out,” the teacher continues. “So you can learn history and how it truly unfolded. ‘Cause, that is true history.”

For history’s sake, Black people weren’t considered full “Americans” until well after slavery ended; therefore, the notion that “African-Americans” could have sold other “African-Americans into slavery” is factually incorrect. Africans from western continental countries did sell other Africans to white European slavers (mostly English, Portuguese, French, Spanish, and Dutch); however, they did not wholly understand the consequences of their actions. Most captured and enslaved Africans came out of various tribal conflicts.

Free Black slavers were around during slavery but weren’t near the numbers that this teacher could suggest. The vast majority of slave owners and those who benefitted from slavery, from America, and throughout Europe were white people. Slavery was a primary basis of the fast-industrializing world economy.

After a brief back and forth, the Black student gets up and walks out of the classroom, which the teacher appears to allow. But after a cut, the Black student seems to have returned and is seen erasing the ‘all lives matter’ message from the whiteboard. This sets the problematic substitute teacher off, and she demands that the student goes to the office.

It’s unclear where the video took place or if the teacher faced repercussions for this incident.