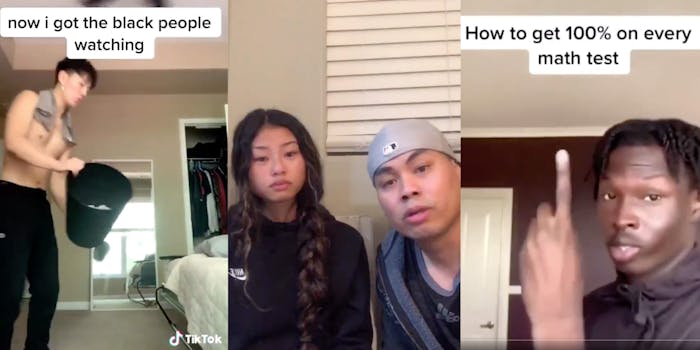 Teens are getting doxed for racist ‘how’s my form?’ TikToks

The memes rely on racist stereotypes and imagery.

Just days after two high school students were expelled over a racist TikTok video, viral clips indicate a trend on the video platform. Teens are relying on racist stereotypes and imagery in videos that follow the “how’s my form?” meme—and they’re getting doxed.

A YouTube video uploaded last week compiled four minutes of TikToks following the trend, many of which evoke harmful stereotypes of a race different from the creator’s race. The clips use the song “Yoga” by New York City rapper 645AR and end with the question, “How’s my form?”

One TikTok shared on Twitter shows a Black user asking Asians to rate his “form” on eating a bat. The video calls back to the xenophobia and racism that spread online after the first outbreaks of the coronavirus.

In another now-deleted TikTok, the user, who appears to be Asian, dances next to the text, “the best positions for 8+” with the eggplant emoji. He writes, “okay, now that all the black people are here,” then puts a bucket on his head and pretends to pick cotton.

But just like the now-expelled couple learned, there are ramifications for sharing racist videos. Twitter users spread the personal information—including the full name, home address, and school name—of the TikTok user who shared the offensive cotton-picking clip.

After one teen made a video mocking Black people and the Three-fifths Compromise, which gave slave states disproportionate representation in Congress before the Civil War, her dad forced her to apologize via TikTok.

“I didn’t mean for it to come off as racist even though, considering the context of it—I didn’t mean it like that,” the teen said tearfully in the clip. “I was just doing a TikTok trend, and my actions aren’t OK.”

One user, however, hopped on the trend without being racist. His TikTok made fun of “White TikTokers” crying after being expelled.