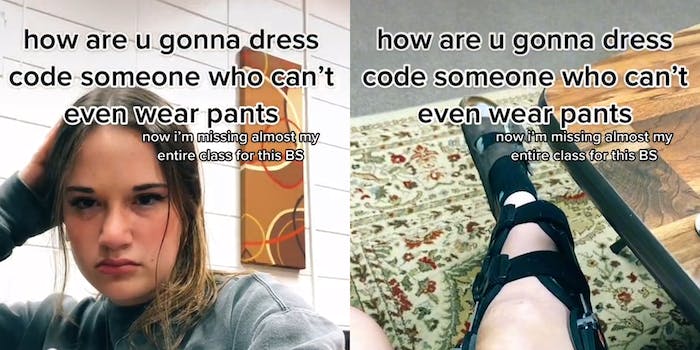 ‘How are u gonna dress code someone who can’t even wear pants’: Student with leg brace goes viral on TikTok for calling out dress code

'Missing almost my entire class for this BS.'

Controversy over public school dress codes proliferated with a TikTok posted Tuesday of a student told she violated dress code for wearing shorts with her leg brace. The video, posted by user @kyles._.w, got over 51,000 views and 10,000 likes by Wednesday.

In the video, the TikToker has an annoyed expression as she records her face and then pans the camera to show that she is wearing athletic shorts and a leg brace that comes up to her thigh.

“How are u gonna dress code someone who can’t even wear pants,” the on-screen text reads. “Missing almost my entire class for this BS.”

In the comments, the TikToker wrote that “6 inches above the knee is the only acceptable length for shorts” at her school. The shorts she wore in the video came up to her upper thigh, which is where the brace stopped.

She also wrote that she had to change into workout leggings, causing her brace to slide and making her have to constantly readjust it “to even walk.”

The TikToker wrote in the comments that she is an athlete and has had to wear the brace before because she tore her meniscus “around the same time last year.” She did not mention whether she had dress code issues last year.

Many commenters expressed sympathy for her situation and said that they had similar experiences. They suggested putting pants on under the brace or wearing leggings, baggy jeans, or men’s sweatpants or pajama pants.

The TikToker responded to the suggestions saying that they wouldn’t work because they either violated dress code, defeated the purpose of the brace, or would just be uncomfortable because of the warm weather.

Other commenters expressed outrage and suggested that the TikToker sue for discrimination. Some also wrote that incidents like this make them want to drop out of school or homeschool their children.

The TikToker posted an update Wednesday wearing her dad’s basketball shorts, which stop slightly above the knee and cover some of the brace. The on-screen text reads, “I guess imma dress like a guy now haven’t got dress coded.”

Update 1:34pm CT, Oct. 25: TikTok user @kyles._.w, who goes by Kyleigh, elaborated on the incident via Instagram message and email correspondence with the Daily Dot.

Kyleigh said that she has had to wear a leg brace twice because of dance injuries and that she has gotten surgery on her right knee, which is currently in the brace. She said she never had issues wearing shorts with her brace before the incident.

“I had been wearing my shorts for the past four weeks of school without getting dress coded until that Tuesday,” Kyleigh said. That day, she was wearing an oversized T-shirt that reached the middle of her shorts. Her teacher immediately stopped her and sent her to the office.

“They told me I needed to change into something appropriate and even stated ‘I know you are limited on what you can wear,’” Kyleigh said of the administrators at her school.

Many commenters suggested that her parents complain to the school, but Kyleigh said her parents did not. Kyleigh, however, spoke to the student council “to see a change in the dress code.”

So far, there has been no change. Kyleigh went shopping for new shorts to wear to school, but she is “still wearing big basketball shorts.” She said she has been wearing the brace since Sept. 8 and that her doctor doesn’t know when it will come off.