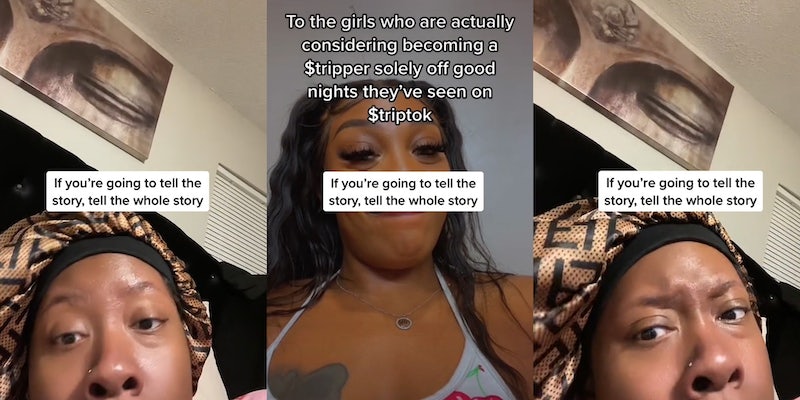 ‘Can we talk about the shootouts?’: TikToker calls out StripTok for glamorizing exotic dancing

'Can y'all tell these folks about the trauma that you've experienced as a dancer?'

TikToker Terreee (@terreekennedy) penned a viral clip that calls out “$triptok” posters who glorify their jobs as exotic dancers online without highlighting the more unsavory parts of the job. Several responses to her original TikTok, along with a stitched clip from another user have started a chorus of shocking stories and debunks surrounding the stripping industry.

As a result, a conversation about the violence many female strippers face, along with nights of low or non-existent payouts, financial hardship, drug abuse, fear for one’s life at the hands of obsessive customers, and murder, was started in response.

@firstclassash #stitch with @terreekennedy Just saying, if you know your content inspires others you should be completely transparent and open. Let people know what they could possibly be signing up for #foryoupage #fyp #uncomfortableconversations #storytime #thetruth #nightlife #strippaanswers #strippacheck #honesty ♬ original sound – ashabillion2

“To the girls who are actually considering becoming a $tripper solely off good nights they’ve seen on $triptok,” Terree wrote via text overlay in the now-viral clip. “If you’re going to tell the story, tell the whole story.”

Another TikToker, Ash (@firstclassash), stitched the video, appending her own experiences working in strip clubs.

“Seeing some of the prettiest and coolest girls that you know get strung out on drugs, or get pimped out? Let’s talk about the nights that you done pay tip out and you don’t make your tip out back. The stories where some dancers got a little too in over their head and went home with a random customer. And then the next couple of days can’t nobody find them, next thing you know, they find her body goddamn thrown on the side of a highway, like can we talk about the shit that we’ve seen? The nights of getting robbed at gunpoint? Like yes, dancing cool but this shit is dangerous.”

The study also found that these establishments were at a higher risk for increased rates of not just violent crime, but sexual crimes as well.

Pantsuit Politics reported that “overzealous customers” were of most concern to exotic dancers. The article cited research from the L.A. Times which said that “79% of strippers report being stalked by customers and 61% have been victims of physical assault.”

“Based on the surveys and interviews, the researcher believes there are considerable ways to improve strip club safety,” Paulsen and Kimball wrote. “Too often policies that affect sex workers lives are created without the input of sex workers themselves. Three key recommendations that were identified through this study included societal support, responsible club management, and better policies that address occupational violence in strip clubs.”

On TikTok, Ash’s video received over 1.2 million views, leading some commenters to share lurid experiences of their own that they encountered while either frequenting or working in strip clubs.

“Someone’s husband wasn’t supposed to be there so his wife came in trying to take OUR MONEY,” one viewer claimed.

“Being SA in the vip room and when you tell management they do nothing about it,” a second user said.

“Se found one of our girls in the club dumpster barely breathing,” a third added. “We’ve saw girls hide from ‘boyfriends’ in fear of their life. It’s a rough road fr.”

“Getting followed home, customer not paying, being mistreated by the owner, yea the stories,” one user shared.

“They neverrrrrrrrrr tell the whole story,” another wrote. “And got these young girls in dangerous situations.”

In addition to discussing the violence that strippers may find themselves on the receiving end of, others said that there are several dancers misleading other young women into thinking that they’re leading luxurious lives rife with profits.

“Wasn’t a dancer, I was a hostess at a strip club for six years,” one user said. “Man, the things the girls use to go through! Not everyone is making 10k a night.”

“They don’t talk about how nights could be so bad you end up having to OWE the club money,” another commented.

A few users chalked this up to a social media issue, where folks are editing their existences to appear as a peachy-keen as possible, never exposing the more unflattering aspects of their daily routines.

“I think this is an issue with social media in general,” one wrote. “No one is happy anymore because we ONLY see the good happening to others.”