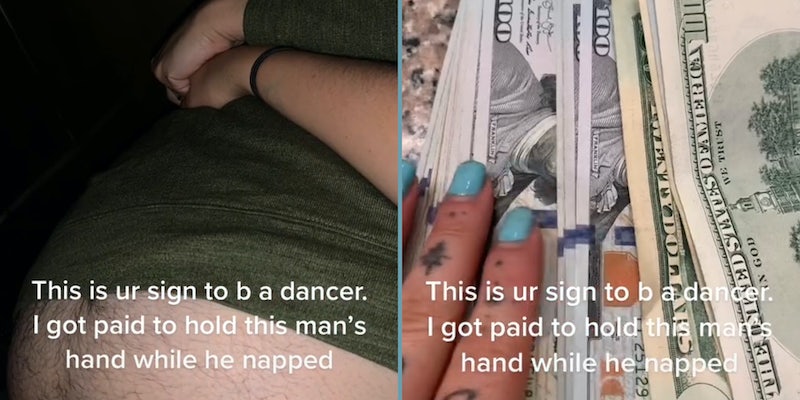 ‘We all need human touch and companionship’: Stripper says she was paid to hold man’s hand as he napped, sparking debate (updated)

'That’s amazing but also so sad at the same time.'

A popular stripper on TikTok sparked debate after sharing she made hundreds of dollars for simply holding a customer’s hand while he slept.

In the video, user Danika (@danikakingtv) encourages her followers to become dancers, implying they, too, could get paid for something as easy as holding hands.

“This is ur sign to b a dancer. I got paid to hold this man’s hand while he napped,” the video’s text-to-speech feature says. The video then cuts to a photo of a pair of holding hands, presumably those of Danika and the alleged napping customer. Danika then films a wad of cash that seems to add up to more than $600.

The TikToker posted the video five days ago and has since gained more than 67,000 views. While the stripper influencer is known to share the ins and outs of the dancing industry with her 8,000-plus followers, this particular video caused viewers to pity the customer.

“Poor guy I bet that feeling of intimacy and care made him so happy. But sad when you left,” a viewer wrote.

When a viewer commented that the situation was amazing but also sad, Danika claimed it might be a little sad but that “we all need human touch and companionship.”

“100%!!!” the user replied. “That’s why it’s kinda sad  hand holding I feel like is so innocent and more intimate, it just shows more of what he internally needs.”

Other viewers criticized Danika for romanticizing a lifestyle that isn’t as easy as she’s making it seem to be.

“Don’t be a dancer! It’s horrible and creates addiction, it’s not as easy as it seems,” one viewer commented. “It’s rare to be paid while someone sleeps and u get sa a lot.”

SA is a common abbreviation of “sexual assault” TikTok users use in order to not get banned or flagged by the platform.

“Except shit like this RARELY happens and ur gonna get SA’d before some dude wants to nap with u for money lol L post,” another viewer alleged. “Someone stays mad,” was all Danika replied.

“Does it not occur to you how impressionable young people are who use this app? Guess who will be blamed when they find out it’s not like this,” they continued.

To that, Danika simply replied, “I post highs and lows. Thanks.”

Update 7am CT, April 13: When reached for comment, Danika told the Daily Dot that this “is really not out of the norm” and customers like the man are “probably [her] favorite type of customer.”

“I wouldn’t really consider this a weird request because there’s nothing weird or sad or abnormal about someone needing human affection and care,” she said. “Some people don’t get that even if they are in a loving relationship or in a partnership for a very long time sometimes people grow apart or are always working or whatever it’s not really my business unless people tell me straight up why they want what they want.”

Danika, who has been a dancer for two years, also addressed remarks that she’s glorifying the job and “trying to guide young women to guide a job like this,” calling it “such a weird thing to say.”

“We’re impressioning young people to do things like get into debt for school or buying a home in a town where they don’t actually have enough money to invest in a home to get married at a young age,” she said.

“Its already putting a stigma around the job,” she added. “I think that people building up the stigma and make it weirder than it is is really harmful.”

She said in her experience, the clubs she’s worked at have all been safe. However, when people attach a stigma to the work, “that’s how it can be a dangerous job.”

“That’s how jobs in the industry can be dangerous because of the stigma and people not seeing it as a real job. You make real money and you do real things and spend real time so it’s a real job,” she said.

She reiterated that she also shows the downsides to the job on her account. “If you look through the rest of my videos I show a lot of stuff about it being hard or when I have a slow week or when a customer makes me cry etc.”

The Daily Dot has reached out to Danika via Instagram direct message for this story.