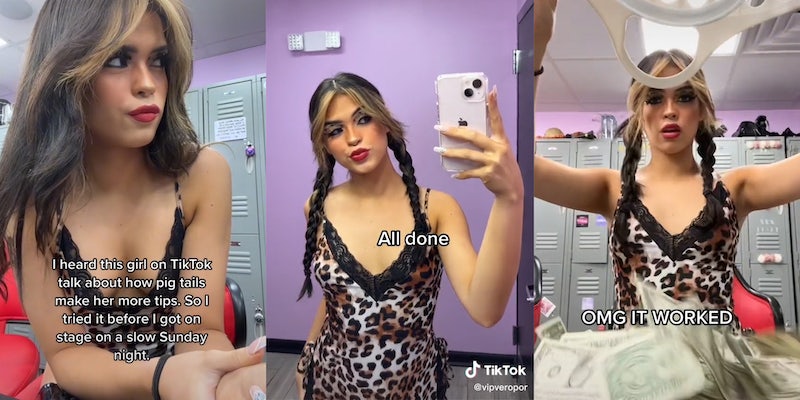 ‘Never putting pigtails on my future daughter’: Stripper wears pigtails in her hair to get more tips, sparking debate

An exotic dancer filmed herself testing a popular theory that wearing pigtails gets you more tips from customers. It worked.

The theory originates from a viral trend on TikTok, popularized by waitresses who would experiment with different hairstyles and report on their earnings.

Commenters in previous iterations of the trend theorized the reason pigtails performed better is tied to the sexualization of women who are perceived as “young and naive,” but, until now, the theory has never been tested by someone like an exotic dancer.

In the video, TikToker @vipveropor films herself doing her hair in her changing room before a show, accompanied with the overlay text, “I heard this girl on TikTok talk about how pigtails make her more tips. So I tried it before I got on stage on a slow Sunday night.”

Once she’s done styling her hair, the video cuts to her holding a laundry basket filled with dollar bills, with the overlay text saying, “OMG IT WORKED.”

“Never putting pig tails on my future daughter,” she captioned the video.

The video was viewed nearly 2 million times in just two days. The viral TikTok quickly sparked outrage and disgust in the comments.

“The whole ‘school girl fantasy’ has always creeped me out,” one commenter said.

“My husband’s never sexual when I have pigtails because he only sees it as cute and the innocence turns him off so idk about these men,” another agreed.

Other dancers also gave their thoughts on the topic.

“This was my trick while dancing, never failed plus I had braces at the time,” one dancer said.

“I was a new dancer… I was the best tipped in the club only bc I was the youngest…” another shared.

The Daily Dot has reached out to @vipveropor for comment.