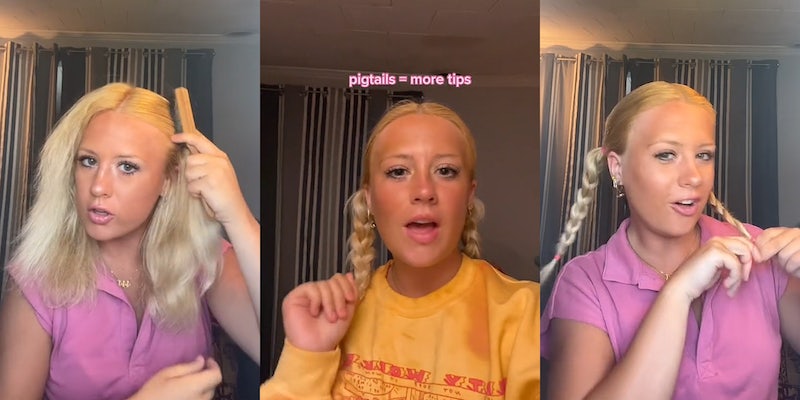 ‘Cool I’m never putting pigtails in my daughters hair again’: Server says she made more money when she put her hair in pigtails

A woman who says she works as a waitress wanted to test the popular theory by female food service industry workers on TikTok that wearing pigtails will result in more tips from customers. In the clip, she went through the process of changing up her hairstyle and then reported her results after a night of work.

Pigtails are a hairstyle long associated with young girls and can make adults appear younger and more naive due to this association. Glami Vibe writes that pigtails make someone seem “more ‘sweet and innocent’ when compared to other hairstyles such as ponytails, buns, and top knots.”

Business Insider also penned an article that cites a study that found male customers tend to tip servers more money if they find them attractive, aka “pretty privilege.” The story reads, “A new study published in the Journal of Economic Psychology found waitresses whose customers deemed them as attractive tended to tip more. A lot more. Over the course of a year, servers who diners considered more “strikingly beautiful” could expect to earn roughly $1,261 more in tips than a homelier server.”

The TikToker in question, Bella (@b_woodard) wanted to see if the “pigtail hack” would work and shared her anecdotal experience in the now-viral clip.

Bella says in the video, “OK so I saw the TikTok about this girl, she’s a waitress and I’m a waitress and how she gets more tips when her hair’s in pigtails for some weird, crazy reason.”

In the TikTok, she’s holding a tub of hair product in her right hand and then begins using her left to massage its contents onto the side of her head. “OK, so I’m thinking slick it back,” she says. “I just washed it so I kinda don’t wanna put this in my hair but too late now. So, I’m gonna part it, slick it back, and put little pigtails in.”

The video then cuts to her brushing the left side of her hair as she stares into the camera, “My hair isn’t that long so I don’t know how well this is gonna look.”

Then the video cuts to her hair separated right down the middle, with two braids on both sides of her head. She pivots her head to show her handiwork and whips her hair back and forth.

“OK I literally look insane right now so I’m gonna braid these pieces, and if this works I’m just gonna say like that is so weird and gross, but, I’m down for more tips,” Bella reasons. “So it doesn’t matter.”

She returns in another cut of the clip wearing a yellow sweatshirt instead of the pink shirt she was wearing previously.

“Y’all were not lying,” Bella says after her shift. “I got a hundred and thirty-five dollar tip by one guy tonight. Wear pigtails to work, I’m boutta be doing this everyday.”

Other TikTok users who saw Bella’s post gave other recommendations for different hairstyles that seem to get customers more likely to add a few extra dollars to their gratuity.

“Try out bubble braid pigtails, dragonbraid ones or space buns!” one user suggested.

“For me it’s French braids and a bandanna-I get called a milkmaid and then tipped heavily,” a second wrote.

“Works every time, I used to call them my tiptails,” a third claimed.

Others speculated as to why folks feel the need to tip more when their server is rocking pigtails, while some joked that they would make sure to steer clear of this hairstyle for their children as a means of curbing any unwanted attention.

“It’s because we look more young and vulnerable,” one viewer wrote.

“Do y’all think it’s bc hair like that makes girls look young,” another questioned.

“Not men because attracted to young girls BYE,” another said.

The Daily Dot has reached out to Bella for further comment.