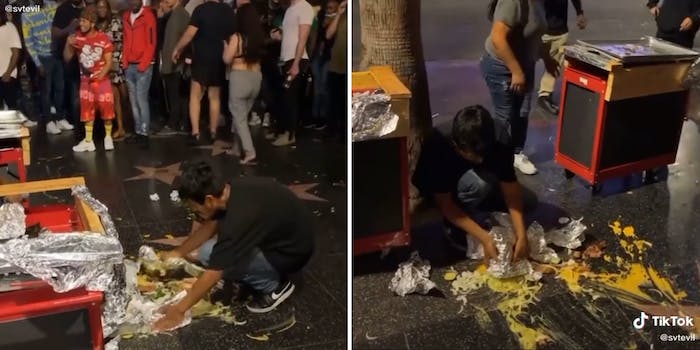 'So sad that people are so mean.'

A viral video on TikTok shows people seemingly laughing at two Hollywood street vendors as they clean up around their hotdog cart after it was vandalized. There have been several reported attacks against Hispanic street vendors, specifically in Los Angeles, recently.

Singer Krystall Poppin reportedly captured the unfortunate incident in a now-deleted Instagram Story. The vendors’ hotdog cart was allegedly vandalized and overturned, with its contents featured on the ground in the clip. The vendors were reportedly situated on Hollywood Boulevard, near actor John Derek’s star on the Walk of Fame.

The video was also posted to TikTok, where it went viral.

The video features some bystanders seemingly laughing at and filming the street vendors, instead of helping, as they attempt to clean up. Many viewers slammed the bystanders seen in the clip, with some calling them “cruel” and “disrespectful.”

“Instead of laughing and recording they should’ve been helping,” one said.

“How can people just stare and record?” another questioned.

“So sad that people are so mean,” a third commented.

Krystall Poppin was also praised on TikTok after it was discovered she reportedly helped the vendors out while everyone else stood by.

On her Instagram Stories, Krystall Poppin wrote that she was “not expecting” the “story to get so much attention.”

“But I’m thankful that I have a platform I can use to spread awareness about the unfortunate situations that vendors have had to deal with. Especially something that happened so close to where I live,” she said.

She then thanked followers who have “shown interest in helping” and said she is currently searching for the vendors to get their information so that the public can help them out.

“I’m not able to reach out to show them how much the world wants to help. I will keep looking for them until I find their info, and I will share it with y’all so you can contact them directly,” she said.

The Daily Dot has reached out to Krystall Poppin.