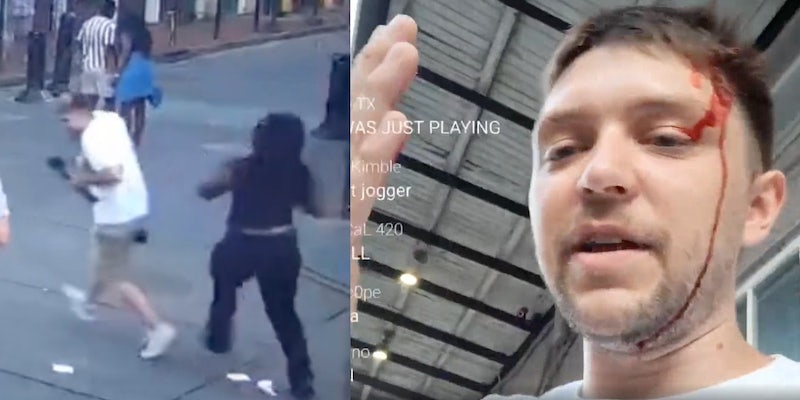 A streamer documented himself using the N-word in front of a Black security guard, going on to laugh about it, and repeating the slur. In apparent response, the guard hit him, according to a video of the incident.

The incident took place in New Orleans, according to a tweet associated with his user account on the streaming platform IP2 Always Win, which has a lot of right-wing content and is where videos of the incident were shared widely.

The streamer, who in one part of the video shows his face and appears to be white, walks up to the Black security guard and asks for directions. He is identified as “Louz” by other users on the streaming platform.

One user, @therightstuff, shared the video on Tuesday of Louz with the title: “Louz violently attacked by [N-word] and is now bleeding in the head.”

The video shows Louz walking up to a Black woman and asking, “Excuse me, ma’m. Do you know where the [N-words] play?”

Louz then asks for directions to someplace, without using the N-word this time.

“What the fuck you just said the first time?” the woman asks.

He continues to ask the question and then thanks her a few times before moving on.

“Yo, she heard me the first time,” he says as he laughs and continues walking, and repeats the N-word a few more times as he continues to walk. “I just wanna know where the peoples partying at you know what I mean?”

He then turns around, talking to the woman from a distance, and says, “I said ‘people.’ We said ‘people!’”

He seems to be talking to someone, seemingly another man.

After the two call out to her, he says, “She’s gonna hit me, dawg. We gotta go.”

As he gets closer to them, he says to her, “I don’t know what he’s talking about!”

She starts to approach him as he tries to escape across the street before she strikes him in the head.

“What the fuck!” he starts whining. “You hit me in the head!”

He then threatens to call the police before the video ends.

Another video of the incident, which appears to have been taken from a security camera across the street, was uploaded on the platform by user @siegheil7 on the same platform.

The videos garnered angry and racist reactions from other users. The platform seemingly has a lot of right-wingers who use words such as the N-word and glorify Hitler. It also has commentary that is homophobic, misogynist, and anti-Black.

One commenter compared the security guard to a gorilla, another one referred to her as “sheboon”—an anti-Black term specifically hurled toward Black women.

“A [N-word] with low impulse control, what a shocker,” wrote another.

Loulz, whose profile has the name “FBI Informant,” engages in right-wing conversations on the platform and recently commented on a post saying the police killing of Andrew Brown Jr., a Black man in North Carolina, was “justified.”

The Daily Dot has reached out to Louz through the Twitter account associated with his IP2 Always Win profile and will update the report if he responds.