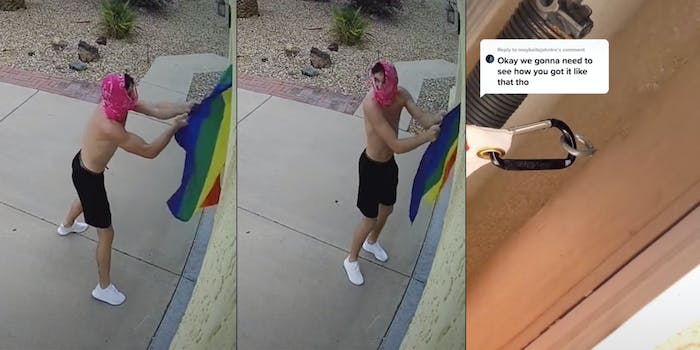 'You will NOT out-construct a pair of lesbians.'

America: land of the free, home of the brave, and also home of the man who tried—and embarrassingly failed—to steal a stranger’s Pride flag.

A Phoenix resident was caught on camera attempting to take a lesbian’s Pride flag off of her garage. She, in turn, made the resulting security footage into TikTok gold, earning nearly 860,000 views and thousands of comments in the three days since it was posted. The video also migrated to Twitter, where it likewise racked up views and comments from amused users.

The TikTok, originally shared by user @leftovergains, features a man attempting to yank her Pride flag off her garage door. Unfortunately, the man—who carefully protected his identity by yanking his entire shirt up over his face—doesn’t quite have what it takes. The video sees the essentially shirtless man fruitlessly grapple with the well-secured flag, yanking and hauling desperately at the colorful bit of cloth for several moments before surrendering to its superior durability.

The dark-haired man gives up after a flurry of desperate jerks fail to dislodge the flag. He then flees off-screen.

Following several requests from commenters, @leftovergains uploaded a second video explaining the stellar lesbian craftsmanship behind her immovable flag. In the brief clip, @leftovergains explains that she has the flag secured to the inside of her garage via a set of sturdy carabiners and a pair of screwing posts. It’s as simple as that.

People were delighted by @leftovergains’s foolproof (literally) design and showed their appreciation for her innovation in the comments.

“You will NOT out-construct a pair of lesbians,” one commenter wrote. “Its impossible.”

Other viewers advised their fellows to “never underestimate lesbians with carabiners.”

A number of people expressed frustration over the act itself, with some wondering “why he felt the need to enter someone’s property and take their flag down.”

“I never knew it was so difficult to mind your own business,” commenters noted.

A few people made the reasonable assumption that the man is also an anti-masker, jokingly asking if this is “the only way to get them to wear masks?”

Quite a few people learned something from @leftovergains’s “weenie resistant flag” and are encouraging her to print out a massive image of the TikTok—and its hundreds of thousands of views—to hang alongside the Pride flag.

She should probably secure that with carabiners, too—just in case.