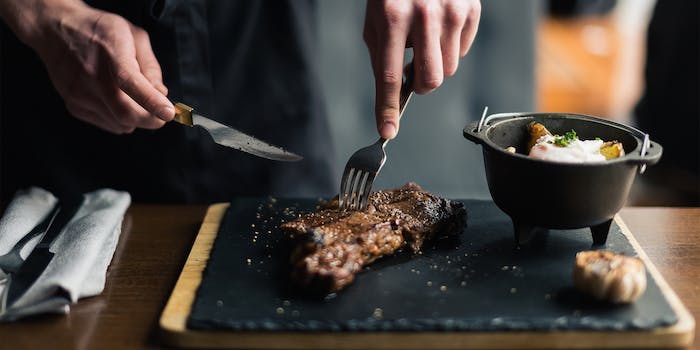 Twitter is ablaze after upscale restaurant chain Steak 48’s Philadelphia location put out a sign showing a requirement of a $100 per patron minimum. Additionally, some on social media are accusing the chain of elitism as well as having a discriminatory dress code.

Steak 48 is a “concept” steakhouse, under the Prime Steak Concepts banner with locations in Charlotte, Chicago, Houston, and Philadelphia.

On Tuesday, @OfficialTrpe posted a photo of Steak 48’s sign detailing the $100 minimum, saying, “There is a $100 per person food & beverage minimum for each person at your table in order to ensure that each guest enjoys the total experience of food, service, and atmosphere. This does not include tax or tip.”

The real question regarding the minimums is that they appear challenging to enforce, regardless of whether the patron can afford the meal or not.

Predictably, the memes came out in full force on Black Twitter and beyond.

Some who don’t see an issue with the price minimum argue that it’s simply the price of a high-end meal.

“Steak 48’s $200 minimum doesn’t sound exorbitant for a high-end steakhouse. Particularly when you include alcoholic drinks. But I’ve never visited. Clearly they’re trying to decrease a segment of the clientele they don’t find valuable long term,” one said.

While the Steak 48 pricing minimums could be perceived as benign for many, the dress code jokes hit at something more targeted. People argue the self-described “strict” dress code—which, in part, entails no “sweat suits or workout attire,” ball caps, “excessively frayed or torn clothing,” bandanas, “clothing emitting offensive odors,” and “any clothing that is excessively revealing and shows a overly bare midriff or excessive cleavage”—is discriminatory against non-white customers.

“For anyone who thinks #SystemicRacism does not exist, check out Steak 48,” tweeted @energizeruben, along with a screenshot of the dress code from the Steak 48 website. “Black folks, please stop supporting these establishments. They don’t appreciate your business.”

After receiving comments questioning the intent of the tweet, the Twitter user went on to clarify, “it is not that we as black folks can’t afford $100. Principle is that steak 48 is targeting urban people. Let’s not forget that The Black dollar is strong. It is imperative that we are appreciated and welcomed at every place of business without target restrictions.”

The Daily Dot has reached out to Steak 48’s Philadelphia location for comment.