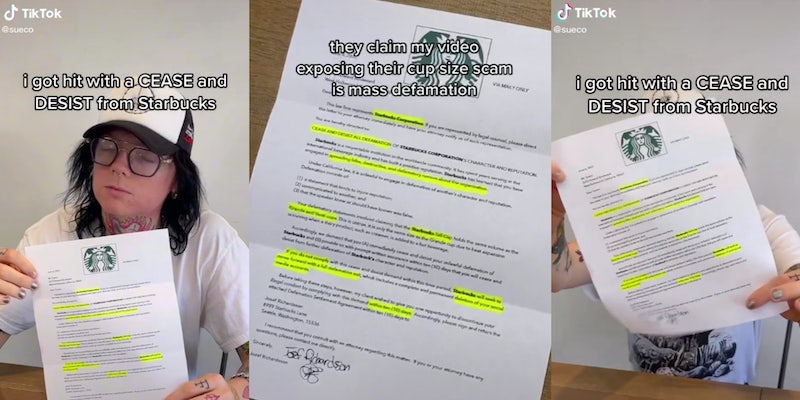 TikToker says he’s being threatened with legal action for ‘exposing’ Starbucks. Is it for clout?

'The amount of people who believe this is scary.'

TikToker and rapper Sueco (@sueco) says he’s being threatened with legal action by Starbucks for his viral TikTok “exposing their cup size scam.” However, it might all be faked.

Sueco posted the clip on Monday, showing him holding up a document allegedly from Starbucks. “I got hit with a CEASE and DESIST from Starbucks,” the text overlay reads, for “mass defamation.”

The camera zooms in on the alleged legal document, which states that Starbucks will move forward “with a full defamation suit,” including deleting his social media accounts.

Then the TikTok switches to an interview Sueco reportedly did with TMZ under the headline, “Sueco sued by Starbucks.” However, there is no such interview available on the TMZ website, indicating the video may also be faked.

As of Thursday, the TikTok has over 8.3 million views.

In the comments, Sueco wrote: “Let’s show em who got the best coffee. bang my line, tours almost sold out, let’s make it run on dunkin.”

While some TikTokers started debating about Starbucks versus Dunkin Donuts, others called out Sueco for faking the entire thing as “a ploy to get his tickets sold out.”

“The amount of people who believe this is scary,” commented one TikToker.

The “Starbucks scam” TikTok that Sueco says is causing the controversy was posted on Saturday and has over 16.8 million views. “You guys are not going to believe this, Starbucks has been scamming us the whole time,” he says. He pours coffee between the tall, grande, and venti sizes, claiming they all hold the same amount. “These guys are marketing geniuses,” he says in the clip.

The Daily Dot has reached out to Sueco and Starbucks via email for comment.