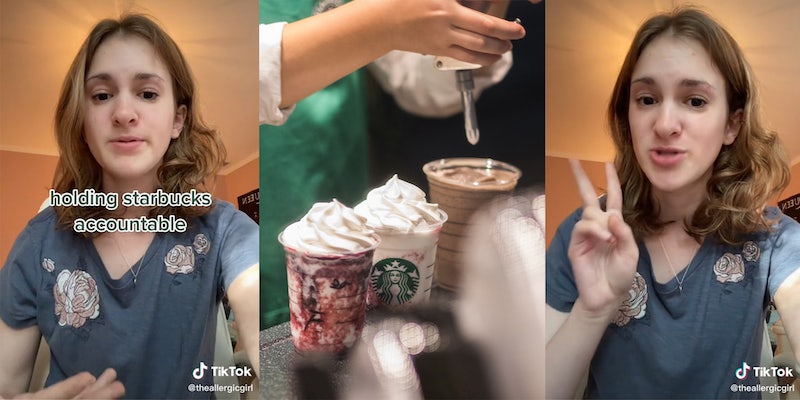 ‘Your laziness could have cost me my life’: Customer calls out Starbucks barista for making ‘unsanitized’ drink and lying about honoring allergy requests

'Not gonna risk my life for that.'

In a viral video, Mia Silverman (@theallergicgirl) shared a recent experience she had at her local Starbucks where they refused to accommodate her allergies.

“Holding Starbucks accountable,” the overlay text on the video said.

The TikToker has more than 50 food allergies and uses her platform to spread awareness and educate others. Her bio encapsulates her mission: “where being allergic is safe.”

@theallergicgirl This is no hate to @Starbucks ♬ original sound – Mia

In the video, Mia explains that she’s a regular at her local Starbucks location, where they accommodate her allergy requests, However, she says she strayed from the two locations she usually visits as she was not in the area. Silverman said she thought it would be okay as Starbucks is normally very accommodating.

“This is no hate to @Starbucks, as I always have a positive experience there, but this specific location needs to do better,” the caption said.

Silverman proceeded to explain that she was disgusted by her experience, and although this may not seem like a big deal to others, “to someone like me, it is.”

After requesting for a sanitized shaker to be used for her drink, Silverman observed the baristas by the drink pick-up area just to make sure the proper steps were being taken. She watched as the barista making her drink asked his co-workers what the drink sanitization request meant before using cold water to rinse the shaker.

“Rinsing is not the same thing as sanitizing my friends,” Sanitizing is either two things: one, putting it in the dishwasher or two, grabbing a new shaker from the backroom that hasn’t been touched yet.”

This distinction is important as Silverman’s drink could be contaminated by traces of products she is severely allergic to, such as coconut and almond milk. After confronting the barista, he still said he sanitized the shaker.

“I tossed the drink in the trash. I was not gonna risk my life for that,” Silverman said.

At the end of the video, the creator called out the specific Starbucks in Boston and said to “do better.”

In the comments section, some users validate Silverman’s experience, while others claim cross-contamination is bound to happen.

“So many establishments prove they don’t care about allergies and disabilities by not training their workers,” one user said.

“You should’ve told them ‘I saw you make my drink and your laziness could have cost me my life’ and gave him back the drink,” another commented.

​​”Not defending them at all but by the sound of it it’s not that he was lying per say, just uneducated and needed guidance on what to do that he didn’t get,” a third user said.

In a stitched video by Mandy, a creator known as @thebudgetingbarista, the TikToker agreed with Silverman and believes the proper training needs to be provided to service workers.

“As a barista, I know these requests can seem like a lot but as someone with severe food allergies, I can understand that it can be a lot worse.”

Silverman told The Daily Dot that she has yet to hear from Starbucks in regards to this incident. The Daily Dot contacted Starbucks via press email but was not met with a reply.