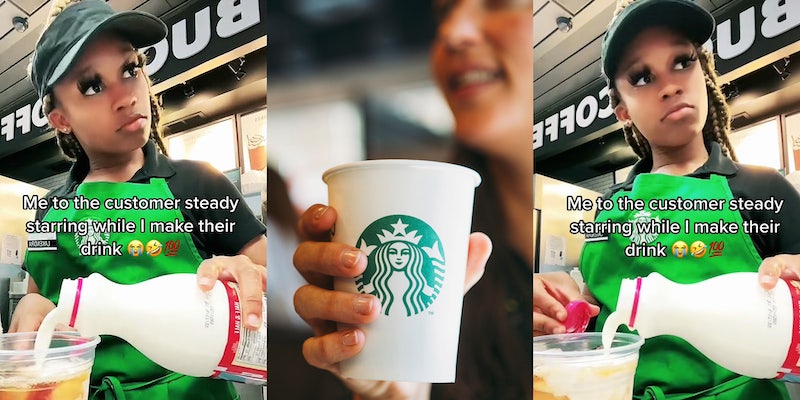 ‘​​They be acting like it’s gonna make me make their drink faster’: Starbucks worker flames customers who stare while their drinks are being made

'They watch me make their drink and still grab the wrong one.'

TikToks from people working at fast-food restaurants or coffee shops continue providing a behind-the-scenes glimpse into their work lives, which viewers can’t seem to get enough. And for those also working in the service industry, they provide a place to commiserate about things only people who have had these jobs truly understand.

And one Starbucks barista’s short video about a particularly awkward type of customer interaction is definitely resonating.

@kimporter_0198 shared a TikTok of her pouring milk into a drink at work, glancing up at a “customer” off-screen with bewildered eyes.

“Me to the customer steady [staring] while I make their drink,” she wrote, also noting that she was off-the-clock while making the video and wasn’t reacting to an actual customer at the time.

Watching a barista make your drink while you wait can often be an unconscious decision, as your brain focuses on what’s next—the incoming coffee. But that doesn’t make it any less weird for those employees to feel eyes on them and wonder if their every move is being scrutinized by a picky customer.

It’s something that other baristas related to, based on the comments Kim’s video has received.

“I stare at them back and if they don’t look away I ask ‘hi are you looking for something?’” wrote @shitnapoo.

“They be acting like it’s gonna make me make their drink faster,” @take_your_pills added.

Another viewer joked that “they watch me make their drink and still grab the wrong one.”

Some people argued in favor of keeping tabs on their purchase while it’s being made, with @tsnowden189 claiming “most baristas don’t read the label for specifications,” and @lameusernamehere23 admitting she just finds “it satisfying to watch them make the drink and watch the coffee change colors.”

Still, having a job where strangers are staring at you half the time sounds weird—but at least TikTok is there for commiseration.

The Daily Dot has reached out to @kimporter_0198 via TikTok comment.