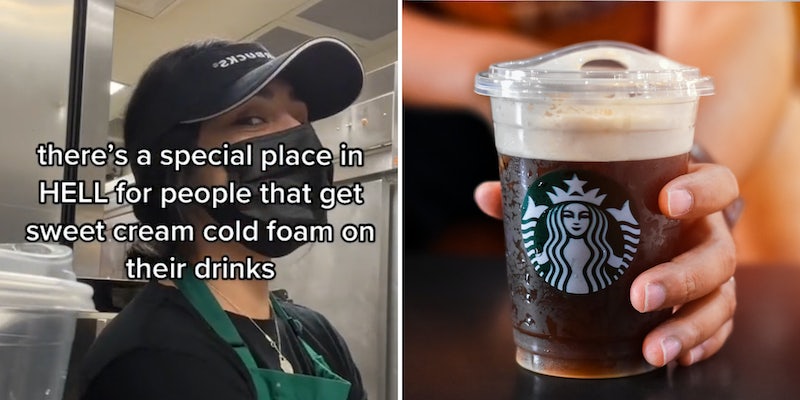 A Starbucks worker said there’s a ‘special place in hell’ for people who order a drink a certain way. A Dunkin’ employee clapped back

'every Starbucks employee on here makes me feel bad for ordering literally ANY drink.'

One Starbucks worker doesn’t like it when customers order cold foam on their drinks. She says there’s “a special place in hell” for those customers — then a Dunkin’ worker clapped back.

That video received more than 752,000 views on TikTok as of Saturday. Viewers said the TikToker was complaining too much.

“I swear to god every Starbucks employee on here makes me feel bad for ordering literally ANY drink,” one viewer commented on the video.

“Im so scared to order anything from Starbucks now 😅 it’s always something,” another viewer commented.

“The way I can’t order anything anywhere anymore because apparently all of the workers will hate me,” a third viewer said.

Several viewers said that employees shouldn’t complain about customers asking for an item that’s on the menu — like sweet cream cold foam. Customers also mentioned having to pay extra for the foam.

“I’m paying for it sooo,” another user wrote.

A former Dunkin’ employee (@pollypocketspssy) then stitched the Starbucks worker’s video, saying, “anyone else notice how Dunkin workers never complain about making drinks?”

“I literally used to burn myself making bacon for customers but I’m not gonna tell people not to get it,” the Dunkin’ worker adds in the video’s on-screen text.

Commenters agreed with the Dunkin worker’s clap back, adding that employees should blame their issues at work on the corporation they work for, not the customers they serve.

“no bc i used to work at SB and the reason drinks r annoying isnt even customers fault its corporate’s for not giving us enough space,” one viewer commented on the Dunkin worker’s video.

In reply to the comment, the Dunkin worker wrote, “no this is my whole point don’t blame customers who don’t know anything, blame the corporation.”

Some viewers said Starbucks workers in general just complain too much.

“i have so much respect for people in the service industry as a whole, but no one complains as much as starbucks workers who get paid more + tips,” one user said.

“Starbucks workers are such babies,” another user commented.

The Daily Dot reached out to users @alewhatsup and @pollypocketspssy via TikTok comments.