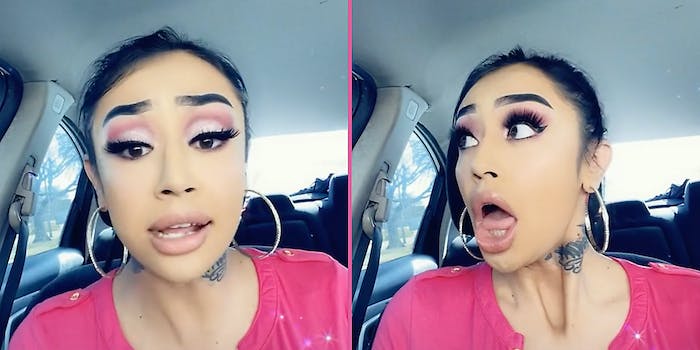 ‘It was Starbucks! It wasn’t like you were trying to take a loan out or anything’: Starbucks ‘Karen’ allegedly wouldn’t let Hispanic woman pay for order with boyfriend’s card

'Some employees act like they own the damn place.'

A Hispanic TikToker said that a Starbucks barista refused to let her use her boyfriend’s card to pay for her order and even tried to confiscate it.

In the video, the TikToker, @barber.babe.dimplez, relays the story from her car. She says she went into Starbucks as she normally does and handed the barista a card to pay. The card apparently had her boyfriend’s photo on it.

“She looked at the card and said ‘This is not you on the card, ma’am,'” the TikToker recalls the barista saying.

She says she told the barista that the card belonged to her boyfriend, and the barista once again declined to use it.

“It’s OK. I have cash,” the TikToker recalls saying in response. She says the barista, however, tried to confiscate the card, allegedly telling the customer, “‘You’re not understanding; I’m not going to be able to give you back this card.'”

So the TikToker says she “snatched” the card back, prompting the barista to accuse her of attempted assault. “No Karen, if I wanted to fucking assault you, I would’ve mopped the floor with your ass,” she says.

The TikToker says she threw the barista “the cash” before walking out.

The video accumulated over 176,000 views. Many said the Starbucks worker overreacted and possibly profiled the TikToker.

“It was starbucks! It wasn’t like you were trying to take a loan out,” one said.

“Some employees act like they own the damn place,” another commented.

“She profiled you,” a third said.

“She judged you based on your look,” another claimed.

Others shared their suggestions for @barber.babe.dimplez’s boyfriend. “He needs to put a pic of both of ya on the card and reorder another one,” one suggested.

The Daily Dot reached out to @barber.babe.dimplez via a TikTok comment and Starbucks’ public relations team via email.