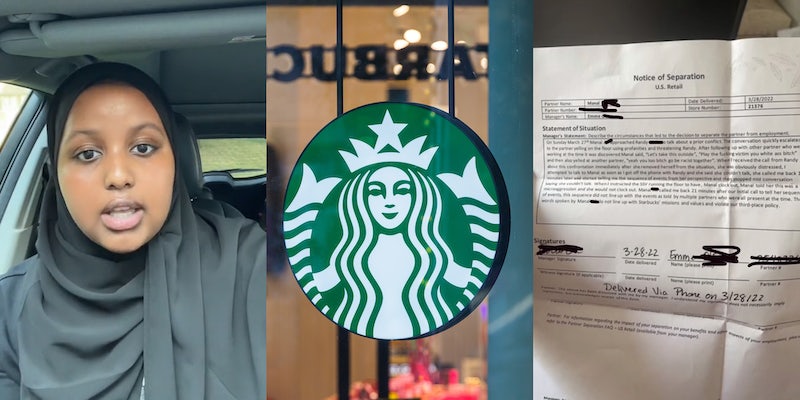 ‘I was always being treated differently from my other white coworkers’: Starbucks barista says she was fired after telling supervisor to not call Black people ‘aggressive’

'She told me not to pull any little race card with her and tried to get me kicked out of the store.'

A former Starbucks barista shared her experience of getting fired at a Minnesota location after she allegedly tried telling her supervisor to not call Black people “aggressive.” TikToker Manal relayed the chain of events on TikTok, where the video quickly went viral with 311,000 views as of Sunday.

In the video, Manal says she had multiple issues with the way the managers and supervisors at the Arden Hills location treated her. She claims she brought up her concerns frequently, but was ignored each time.

Manal claims Starbucks has a strict policy against discrimination, but she says she was on the receiving end of racist remarks.

“From the moment I was hired, I noticed how I was always being treated differently from my other white coworkers and I was always handled in a really hostile way,” Manal says in the video.

“So I actually decided to go speak to my supervisors about my concerns and before I even got to express my concerns I was immediately yelled at by all three of them,” she continues.

The TikToker says the supervisors made it clear she was the issue and that she would get reminders not to “attack anybody at the store.”

“I was also told I was an aggressive person by the way I walked, the way I sit down, and the way I make drinks,” Manal says.

This comment plays into the harmful “angry Black woman” stereotype, which stems from a tendency for some to believe a Black woman’s anger is part of her personality, rather than a result of external conditions, per the Harvard Business Review.

After continuously being ignored by her shift manager, Manal says she applied for a transfer to another store and got it approved. The incident that led to her getting fired arose when she decided to confront a supervisor on one of her last days of work at the Arden Hills location.

“Basically I wanted to tell her ‘don’t call black people aggressive by the way that they walk or make drinks’ or you know stuff like that, and before I even got to get a word in this supervisor went crazy,” Manal says. “She told me not to pull any little race card with her and tried to get me kicked out of the store.”

This is when the manager allegedly began cursing her out in front of customers and employees.  Manal claims the employee even threw an iPad on the table and tried pushing her. After her “tantrum,” Manal says the supervisor went to the back room to call the manager and claim Manal threatened her.

Manal says her manager refused to check the security camera to see who was really in the wrong and then got kicked out of the store. Manal says no issues were rectified and she got her “Notice of Separation” letter in the mail, which she shared in the video.

The letter was dated March 28 and noted that the date of the incident took place the day before. According to the letter, Manal was the one who was yelling and using profanities to threaten the Starbucks employee. The letter quoted Manal as saying, “Play the fucking victim you white ass bitch,” and “Let’s take this outside.” Manal claims nothing in the letter is correct in any way.

The creator explains in a follow-up video that despite the letter showing she was fired at the end of March, she was actually fired at the end of May after being taken off the shift schedule for two months. She claims Human Resources, Ethics, and the District manager at Starbucks all started an investigation into the altercation but never completed it.

The TikToker says she has reached out to a third party that works with Starbucks to resolve the issue. In follow-up videos, Manal says she has also spoken to a lawyer and has partnered with a local activist group. The latter has organized a protest at the Starbucks Arden Hills location on Sunday to demand the coffee chain fire its “racist employees.”

“They have all acknowledged their behavior and blamed it on their stress and just victimized themselves,” Manal says in a video. “Everyone at that store saw what was going on but no one did anything at all.”

The Daily Dot has reached out to the creator via TikTok comment and Starbucks via email.