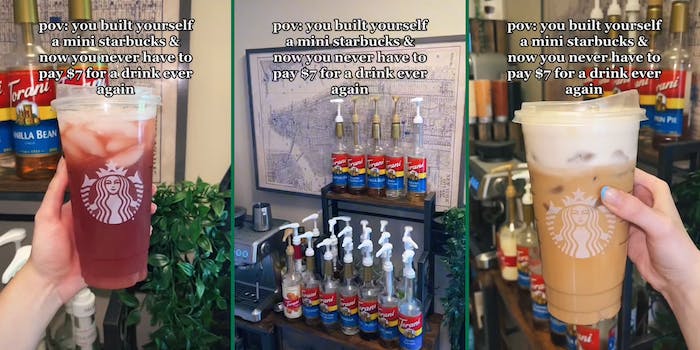 ‘After a certain amount of drinks, you’re saving’: Influencer builds ‘mini Starbucks’ at home to save money, sparking debate

A TikToker has sparked discussion on the platform after showing her home Starbucks setup, which she claims allows her to make nearly identical drinks to the famous coffee chain at a substantially lower cost.

User Coco (@cosettecutie), who boasts 260,000 followers, posted the video just a few days ago, adding to a long list of Starbucks-related content on her page. It amassed over 2.1 million views.

“Pov: you built yourself a mini starbucks & now you never have to pay $7 for a drink ever again,” the text overlay reads.

“This is your sign to learn how to make your starbucks order at home!!!” the caption reads.

@cosettecutie This is your sign to learn how to make your starbucks order at home!!! #starbucksathome #starbies #sbux #coffee #cofffee ♬ оригинальный звук – Мария – Stories • SMM

At first, many users were critical of Coco’s Starbucks-at-home setup, with several users pointing out the up-front cost and learning needed to make the drinks as a primary reason for not making their own.

“Now you just have to pay for the machine, cups, ingredients, and learn how to make them,” a commenter wrote.

“This is arguably more expensive lol,” another stated.

But as one adds up the cost of each of the items in her home Starbucks, the costs may be smaller in the long-term for a frequent Starbucks guest.

For example, the main coffee maker visible in her video is the Breville BES870XL, which runs around $700, according to Amazon. In other videos she mentions an Aeropress ($40), and there is also a Nespresso machine visible in much of her content (she recommends the Nespresso C122-US-CH-NE, which costs $350, per Amazon). Each syrup costs around $10 to $15, plus an additional one-time cost of $5 for each pump.

As Coco says she reuses cups, estimating on the higher side of the products visible in this video, the total cost of her setup is over $1,600.

That means if one were to replace their purchase of a $5 Grande white chocolate mocha from Starbucks every day with a homemade version, they would recoup their costs in just over a year, factoring for the price of coffee and additional syrups. If the drink was one of Starbucks’ pricier options, such as the $7 drink Coco mentions in her video, the costs would be recouped even sooner.

A user explained it thusly: “YES, the initial cost for all that material is more. but after a certain amount of drinks you’re saving. it’s just math.”

For her part, Coco estimates in comments that the actual cost of her take on the Starbucks iced vanilla latte is $1.05.

As one user pointed out, there are other benefits to such a setup for some people. “You don’t have to deal with people either!” they said.

The Daily Dot reached out to Coco for comment via email.

Update 11:05am CT, June 1: “My passion for ‘being my own barista’ started a few years ago – I was in my third year of university (this was 3-4 years ago), and I bought my first nespresso machine. I had one machine, and a couple of syrups, but I was still going to Starbucks every day,” Coco told the Daily Dot. “However, it was starting to be super pricey. I started looking up Starbucks recipes at home and that’s when I realized that with the right proportions and with the right ingredients, making the drinks I was paying $6-7 for wasn’t that difficult.”

She also said she understands the surprise and criticism of her massive coffee setup but stresses that this is a project that she’s been working on for quite some time.

“When people see my coffee bar now, their first thought is ’wow, that’s a little excessive,’” she admitted. “But in reality, this has been years in the making!… I make sure to be open with my audience and I’ve been sharing an Amazon list with them so they can see the real cost of everything I purchase for my coffee bar. I also make sure to always share more affordable alternatives with my followers (like the Aeropress, a gadget that can make espresso, cold brew, hot coffee & iced coffee for only $35). I also ensure to tell my followers that you don’t need to spend a crazy amount of money to make coffee at home. They only really need a couple of syrups that they like. I even have a few recipes where I use NOTHING from my coffee bar to make Starbucks drinks. I even make the syrups myself for these types of videos.”

“Making coffee at home and being my own barista is something I’m passionate about. I’m also passionate about sharing recipes with my audience,” she continued. “If it wasn’t for my audience, my coffee bar would probably be much smaller – but helping my followers make their favorite drinks at home requires this type of setup.”

Still, she told the Daily Dot that Starbucks is only one part of her coffee passion.

“I love trying to recreate Starbucks drinks at home, but I also love being creative and coming up with my own coffee creations,” she explained. “It’s my hobby! Some people love baking, cooking, painting, etc., but my hobby just happens to be coffee!”