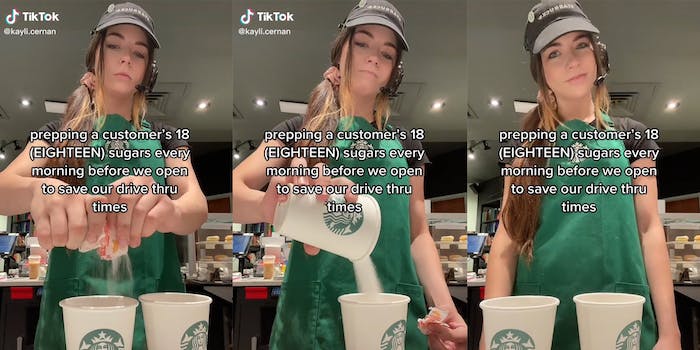 ‘Nothing could’ve prepared me for the first time I heard this order’: Starbucks worker says she preps regular’s order before store even opens to save time

'At a certain point you have to accept that you just don’t like a drink, If you need 18 sugars to enjoy.'

A Starbucks employee went viral on TikTok after she posted a video prepping a regular customer’s order before the store opens in an effort to save a bit of time while dealing with a potential rush of patrons. That’s because this particular individual’s order begins with 18 servings of sugar in their beverage.

In the video, the TikToker who uploaded the clip, @kayli.cernan stands in her Starbucks employee uniform with two cups of coffee before her. She dumps the remaining packets of sugar into one cup and then pours the contents of that cup into the other.

“Nothing couldve prepared me for the first time i heard this order fr,” she added in the caption of the video, which was viewed nearly 800,000 times.

Eighteen servings of sugar is significantly more than the recommended daily amount of added teaspoons of sugar total that humans should be consuming on a daily basis, according to the World Health Organization. Some viewers shared concerns about the customer’s health. Others suggested that instead of just putting in a bunch of sugar, Kay should use syrups instead. However, Kay rejected this tactic and urged other baristas not to take that advice.

“Some of these comments are concerning… this is a reminder to my fellow baristas to not switch out sugar for syrup unprompted. this is dangerous,” she wrote.

Others posted the bizarre drink orders they received while working at Starbucks.

“I had someone get 19 packets of white sugar and 5 inches of cream in a venti hot coffee once … so glad not a regular,” one wrote.

“A customer literally came in an ordered two tall pikes with 26 splenda each during peak…” another complained.

Others shared they, too, have regulars with similar orders.

“We have someone get 12 pumps of chai and 10 sugars everyday,” one claimed.

“We have a man who gets 26 splendas and 13 stevias in his tea,” another said.

In 2021, several Starbucks baristas began posting pictures and videos of some of the more unusual beverage requests they receive on a daily basis, with many of them lambasting customers’ drink choices—so much so, that many folks online began urging the coffee chain to limit the number of customization folks can get with their drinks, or stick to a set menu.

The chain responded to these concerns in a statement to Fox News.

“Customizing beverages at Starbucks and our baristas’ expertise in helping customers find and craft the right beverage has and always will be the heart of the Starbucks Experience. There are many ways for customers to modify their favorite beverage at Starbucks and most customizations are reasonable requests from customers,” the statement reads.

The Daily Dot has reached out to @kayli.cernan on TikTok for further comment.