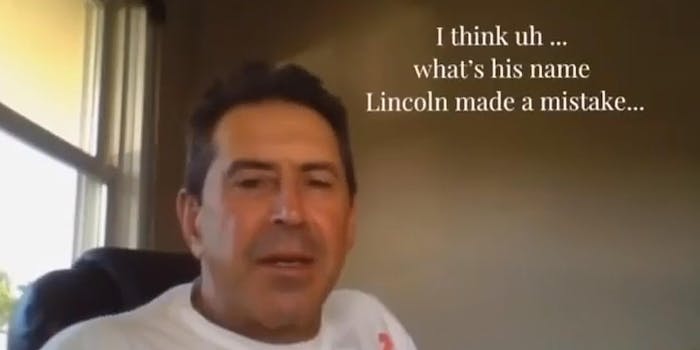 St. John’s University in New York has fired its assistant fencing coach after a video surfaced of him saying former U.S. President Abraham Lincoln “made a mistake” by ending slavery.

Boris Vaksman made the comments in a Zoom call recorded on June 3. The call was then posted anonymously on Instagram. It became more widely publicized when Ibtihaj Muhammad, who won a medal for fencing at the 2016 Olympics, reshared the video to her account.

“As soon as the recording was brought to our attention the matter was immediately investigated and the individual was terminated by the University,” the university’s Director of Athletes Mike Cragg said in a statement on Thursday evening. “The racist comments expressed are completely unacceptable and a rejection of everything that the University stands for.”

In the video, the former fencing coach begins his racist rant saying that “the most trouble” is coming “from Black people.”

“Because they don’t want to work, they steal, they kill, they [do] drugs, everything comes from [black people]. The majority,” he said. “I think…what’s his name, Lincoln, made a mistake.”

Muhammad shared the video on her Instagram saying it was an example of what racism looks like “when we’re not around.”

“This is what racism looks like in fencing, a small piece of a larger puzzle,” she wrote in the caption, according to the Hill. “This video is a reminder that coaches and teachers, those people entrusted with building us, educating us, and protecting us, too often perpetuate the discriminatory treatment and behaviors that normalize racism.”

The video comes amid worldwide protests for George Floyd, the unarmed Black man who died after a cop knelt on his neck for almost nine minutes. His death sparked outrage, prompting people to march in the streets to protest police violence and systematic oppression.