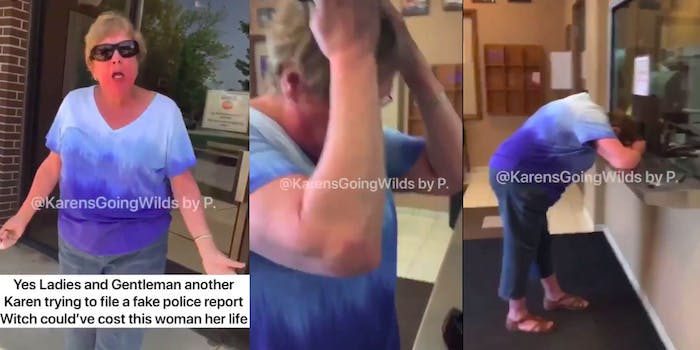 A white woman, dubbed “Police Station Polly,” was caught on video seemingly trying to file a police report after calling a Black woman the “N-word” during a driving dispute.

In the video, as the two women walk into the police station, the woman asks Polly, “You wanna tell South Holland, you calling me a [N-word]?”

Polly begins to apologize to the woman, but she isn’t receptive. “You called me a [N-word],” the woman recording says.

“Yeah, well you passed me! I’m so fed up with all this shit!” she says.

As Polly enters the police station, she tearfully tells the police, “I can’t take this anymore. I’m trying to move out,”

The woman corrects her, “No, she called me a [N-word]. She drove here to cry.”

Polly tries to defend herself with more racism. “She passed me on the left! I witnessed the lootings; I can’t take anymore!” she exclaims.

“You think it’s OK to call someone a [N-word] because you’re tired of looting?” the woman asks.

The woman then tells her to “shut the f*ck up!”

Polly then makes the mistake of continuing to tell the woman that she’s “tired.”

Then the video ends. It’s unclear if any police reports were actually filed.