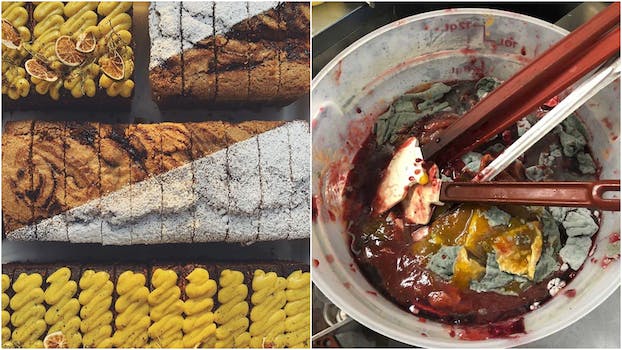 The allegations levied against Sqirl are vast—and nauseating.

Over the past decade, Los Angeles restaurant Sqirl has become one of the city’s trendiest and most popular eateries. The self-proclaimed “hip cafe that features global-inspired breakfast and lunch fare” draws tons of people for its various homemade jams.

But over the weekend, Sqirl and its chef/owner Jessica Koslow came under fire on social media for allegedly selling jams that had a thick layer of mold on top, operating an illegal kitchen space that it hid from health inspectors, and having rats in the kitchen.

Joe Rosenthal, a self-appointed “scientist and food antagonist,” shared a myriad of damning claims on his Instagram story from former Sqirl employees (some of which writer/producer Ben Mekler has captured in a Twitter thread). They alleged that Koslow did not follow proper sterilization protocol with her jam and failed to boil it before canning it until at least 2014.

The jam was also allegedly kept inside a walk-in kitchen space that had improper ventilation. The fan in this space had mold on it, and it spread mold spores onto the jam, which was left out without lids due to improper cooling procedures.

This produced a thick layer of mold on the jams that one former employee claimed was a “quarter-inch thick.” Other former employees claimed Koslow instructed them to scrape the mold off into a bucket, and that the Health Department would allow Sqirl to sell the jam after removing two inches. A photo of the mold bucket can be seen here.

Several former employees also claimed that Koslow hid this illegal kitchen from health inspectors and would lock them in the space and turn the lights off whenever they visited the restaurant. To make matters worse, the space allegedly became infested with rats, and employees often had to mill around the kitchen, which they called “jam world,” in the dark to search for inventory.

“One time Koslow closed down Sqirl for the day because there was a rat in the dining area,” an employee told Rosenthal via Instagram DM. “She made it seem like she was giving the staff a day off but was probably repulsed and scared of people finding a rat inside.”

Sqirl’s controversies did not begin with this weekend’s allegations of mold, rats, and illegal kitchen space. Koslow has also been accused of gentrifying the neighborhood in which Sqirl is located, underpaying her employees, and failing to respond appropriately to numerous workplace sexual harassment claims.

Certainly, Koslow did herself no favors among the critics who called “gentrification” when she described Sqirl’s location as “this shitty corner on Virgil and Marathon” that cost “two dollars per square foot” in a 2016 Eater profile.

Last month, the @sqirltruth Instagram account shared a screenshot of a post in which Sqirl vowed to donate 1% of gross sales to organizations that fight to end racism. Screenshotted comments show several users raising the aforementioned issues and accusing the restaurant of only making donations to save face. Sqirl has since deleted the post and disabled comments on its Instagram.

Several former Sqirl employees also told Rosenthal that, despite Koslow being the public face of the business, her partner David Prado is instrumental to the restaurant’s success. Prado would allegedly make jam overnight at Sqirl while balancing a day job.

Following the recent allegations against Sqirl, Oakland spice company Diaspora Co. announced on Sunday via Instagram that it had pulled out of a planned collaboration with Sqirl and pulled all remaining Sqirl jam from its site.

“We went into this collaboration because the opportunity to spotlight BIPOC farmers who grew the rhubarb and the cardamom in jam form by a famous jam company like Sqirl felt very exciting, and a way to honor these special crops,” Diaspora Co. wrote. “But as it was rightly pointed out, the collab gave Sqirl another trendy marketing boost that was in direct opposition to what its own workers are fighting for: BIPOC equity and ownership (of recipes and more) at Sqirl, and in protest of unsafe working conditions.”

The Daily Dot cannot independently confirm the allegations levied against Sqirl, but on Sunday, the company issued a statement on Twitter addressing the mold allegations.

Sqirl claimed that because its jams contain less sugar than typical supermarket jams, they are more susceptible to “the same types of mold that develop on some cheese, charcuterie, dry aged beef, and lots of other preserved foods.”

“With bulk jam, the product is poured into containers hot, cooled completely, and then stored in the walk-in. With this bulk jam, over time, mold would sometimes develop on the surface that we handled with the guidance of preservation mentors and experts like Dr. Patrick Hickey, by discarding mold and several inches below the mold, or by discarding containers altogether.”

“Sqirl is ever-evolving, and now more than ever before,” the statement concludes. “We’re committed to continuously improving into a better and safer restaurant.”

Update 8:11am CT, July 14: In a lengthy statement sent to the Daily Dot, Koslow apologized for the secret kitchen she ran and promised to “demonstrate” that she learned from her mistakes.

“Sqirl was built with a vision in my mind and the little money I had saved. We started with boxes as tables and crates for chairs. Like any business, as we started to grow, we needed more space, so in 2013, I acquired a secondary kitchen in the space that is now Sqirl Away (directly next door to Sqirl) and it was permitted to operate as a kitchen. I filed paperwork and proactively contacted the Health Department to request an inspection in 2013.

“The truth is that at the time I thought I could update the additional space with the little funds I had saved. But the job ended up being bigger than I could afford and my bank would not give me a loan. Around that time, our secondary kitchen fell off the radar of the Health Department, despite the fact that Sqirl’s main kitchen received regular inspections. Ashamedly, I took advantage of their oversight and did the best we could as we used Sqirl’s main kitchen for all our restaurant orders including jam, and used the secondary kitchen primarily for baking and food prep.

She also pledged to change the way she handled jam.

“We have already thrown out any jam with mold on it and will continue to do so moving forward. Jam with mold will not be permitted in any of our kitchens or our restaurant. We are implementing the same “hot pack” method which is a commercial industry standard that involves pasteurizing all the jam used in the restaurant and storing it in smaller glass containers–just like we always have done with our retail products. We are also submitting samples of our jam to an independent lab, Certified Laboratories, Inc., for testing to ensure its safety and longevity.”