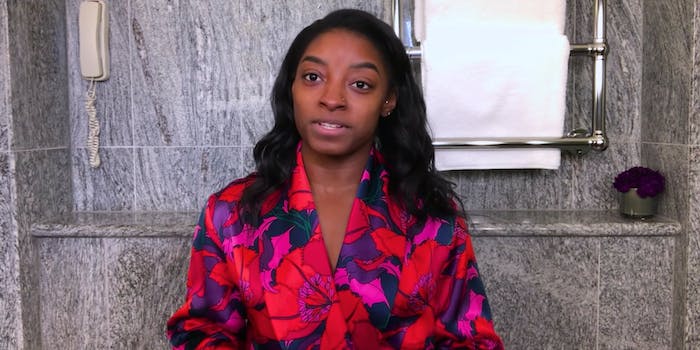 'Someone get a Black photographer in Vogue i’m begging.'

As Simone Biles graces her first-ever cover of Vogue for its August issue, the photos released from the shoot are drawing criticism.

Many online are calling out the poor lighting of the shoot and said the photos don’t show off the Olympic gymnast’s athletic abilities.

“Simone biles is one of the best gymnasts in the entire world she can do the craziest things with her body and they gave her boring clothes, boring lighting and boring angles ….. someone get a black photographer in vogue i’m begging,” Twitter user @cyberspacehobi wrote.

In the 127 years that Vogue has been published, there has only been one Black photographer to shoot the cover: Tyler Mitchell, who famously shot Beyoncé’s September 2018 cover. For the August 2020 issue, veteran photographer Annie Leibovitz shot Biles for the cover.

“After seeing what intentional photography does to bring out the beauty in darker skinned women like Issa Rae and Michaela Cole, this is actually violent,” one Twitter user wrote in response to a tweet featuring one of the photos.

Leibovitz got her start in the industry in the ’70s, and she began regularly shooting for Vogue in 1998.

“How [can] a person work as a professional photographer for decades and still be this bad at lighting and photographing dark skin is baffling to me. Annie are you ok?” another Twitter user questioned.

Others wished Biles well, noting this is her very first Vogue cover and that she should be proud of the achievement regardless of how the photos turned out.

“I really hope Simone Biles doesn’t feel any way after this Vogue cover,” @ScottieBeam tweeted. “It’s breaking my heart y’all are talking about her like that.”

As media brands began diving into introspection in response to the 2020 Black Lives Matter movement, editor-in-chief Anna Wintour admitted in June that Vogue failed its Black employees and took “full responsibility”—for the lack of—and failing to support Black staffers at the company. In an internal email sent to staffers, Wintour wrote, “I also know that the hurt, and violence, and injustice we’re seeing and talking about have been around for a long time. Recognizing it and doing something about it is overdue.”