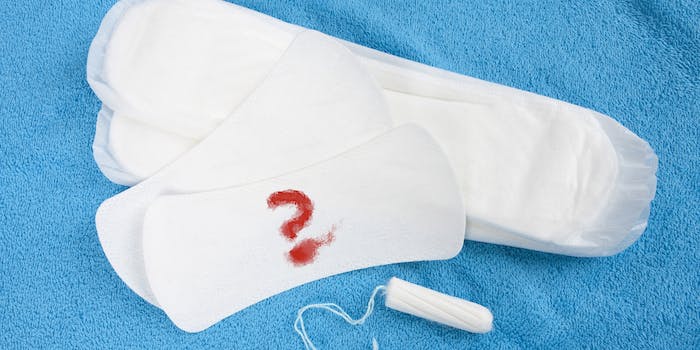 It can be normal, but should always be checked by a doctor.

Spotting—those tiny streaks of blood that sometimes appear when you don’t have your period—can be worrisome.

Dr. Didi Saint Louis, assistant professor of obstetrics and gynecology at Morehouse College, told the Daily Dot that spotting can be common—but that it’s “not meant to happen” and should always be checked out by a doctor just to be on the safe side.

Saint Louis said that if it only happens once, it’s probably nothing to worry about; hormone fluctuations and even stress can cause the rare spotting to occur. But if it happens more than once, there could be an issue.

“I would tell patients to wait about two to three months,” Saint Louis told the Daily Dot. “It usually will go away, and that often happens within the next cycle. But if it’s happening for around three cycles, they should see a doctor.”

Spotting is common enough that women and teens frequently post about it on forums such as Reddit’s r/menstruation and the social boards embedded in apps like Period Tracker. But why does it happen?

According to Saint Louis, women and girls experiencing spotting usually fall into one of three categories: either they’re on birth control pills, they are just beginning to menstruate (menarche) or are slowing down (menopause), or they are showing signs of a sexually transmitted infection.

Largely, light bleeding between periods has to do with hormones—i.e., girls are in the midst of the massive hormonal change that is the beginning of menstruation, or birth control medication is causing fluctuations in estrogen levels.

“If I have a teenager who comes to me for spotting and it’s her only complaint, I might wait to see what happens because it’s pretty normal. It can take up to six years for your cycle to become regular—and it’s almost like when you start a car and it takes a few tries,” said Saint Louis. “But if it happens consistently, I would check to make sure it’s not something else.”

The same thing can happen with women over 40 who are entering perimenopause: that time toward the end of menstruation when your cycle basically starts flipping out and doing things it never did before.

“We tend to be more cautious with perimenopausal patients,” Saint Louis explained, “especially if they are obese or were smokers, because spotting could be a sign of endometrial cancer.”

So spotting between periods can be normal if you’re a teen, perimenopausal, on birth control, or even ovulating (when hormones naturally fluctuate more than usual). But if you don’t fall into any of those categories, or the spotting is consistently happening month after month, see a doctor.

“Sometimes spotting between periods can be the sign of an infection, something going on with her cervix that can cause her to bleed from the cervix, ” Saint Louis told the Daily Dot. ” It’s most often chlamydia and gonorrhea or trichomoniasis.”

Spotting can also be a sign of HPV or cervical cancer, or even a thyroid condition. Unfortunately, the amount of medical research devoted to menstruation and spotting is small—so Saint Louis recommends that any woman or girl seeing their doctor about it ask a lot of questions: about why the bleeding is occurring, what signs and symptoms to watch out for, and for detailed information on any medication prescribed.

Many of the questions women post about spotting in forums and message boards focus on the color, texture, or amount of blood. But those details, says Saint Louis, aren’t as important as the fact that bleeding is happening at all.

“If you’re healthy, you shouldn’t be spotting between cycles,” Saint Louis told the Daily Dot. “If it’s something that’s recurring, that means something is going on.”