The app lets girls and women ask each other anything about their most intimate body issues.

Every 26 days or so, I freak out and worry that I either have endometriosis or early onset menopause. Why are my periods so incessantly violent? Can anyone actually bleed this much without dying? Is this because I’m in my 30s? If so, does this mean my youth is basically falling out of my body in goopy red chunks of uterine lining? Also, why am I sweating so much? One thing is certain: Being female-bodied is not for the meek.

Periods can be downright scary, and let’s be real—doctors don’t always have the answers to women’s problems. The medical community has often been accused of ignoring women’s health needs, and there are lots of women, myself included, who are in the dark about what’s actually happening down there. So what do we do when we’re wondering what that smell is, or why there’s a sudden pain emanating from a reproductive organ? We check in with the ladies, that’s what—and there’s an app for that.

When women and girls seek an answer to the anatomical mysteries swirling around their nethers, they post a question to the social boards of Period Tracker, or P. Tracker, an app founded in 2008 by a husband-and-wife team who were looking for a better way to track menstrual cycles.

Period Tracker started like any other period-tracking app: It’s designed to allow users to plug in their cyclical details as they occur, which will hopefully provide insight and control into the menstruation and fertility processes. You log in, add a start date for your current period, and choose from a menu of symptoms (bloating, nausea) and moods (frustrated, spacey). 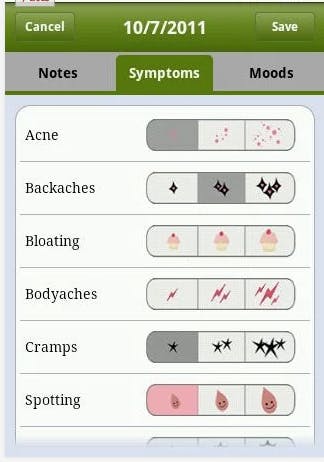 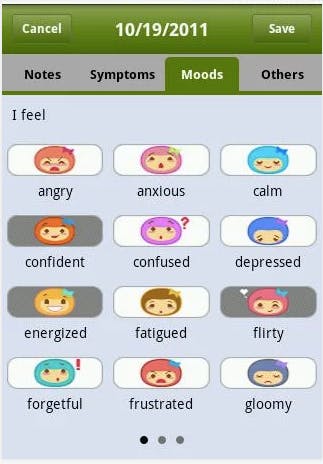 The idea of tracking periods on a calendar is hardly new, as ladies have been counting off days with red markers forever. But the amount of apps designed to remind us when we’re going to cramp up, bleed buckets, and get crazy is exponentially increasing. If you type ‘period’ into the App Store, for instance, 658 results pop up.

One of the most active social boards on Period Tracker is the depression sub-group. At times, the chat revolves around medications and solutions, but at least once a day, a user posts a disturbingly suicidal message. The developers noticed it, and every five days they repost a long message listing mental health resources.

The social boards are reminiscent of those 1970s feminist “rap sessions,” where braless womyn in overalls offered up speculums so everyone could get to know their cervixes.

There are nine main social boards on P. Tracker, each with as many as 18 sub-groups. The social feature is accessible only to those who pay $1.99 for the full version. To see what the ladies were posting, I logged into the Symptom groups and then into the Flow & Spotting sub-group. Users posted about once an hour, from the medically worried (“I took the next choice morning after pill and now am bleeding… is that a side effect/normal?”) to the casually annunciatory (“starting my period on a full moon makes me feel like a cool witch.”)

The development team behind P. Tracker, GP Apps, said they don’t release user metrics publicly. But they did say that most users fall in the 18-35 range, and the most active social category is “Trying to Conceive.”

“Most of our users use the community as an extra resource, similar to the research on the Internet,” said a GP Apps spokesperson, “For many health concerns, users refer other users to see their doctor of medical professional.”

Period Tracker user Kate Getty, 33, explained why women and girls are so comfortable logging on and asking total strangers about their most intimate body issues.

“I feel like periods, conceiving, and all the things associated with the red dot in our underwear, makes women feel ‘less than,’” Getty said, “To know a stranger isn’t going to judge and just give you a straight answer, probably [by] sharing an anecdote of how this very same thing affected their life, 700 miles from yours, it’s, I don’t know, reassuring somehow.”

One of the most active social boards on Period Tracker is the depression sub-group. At times, the chat revolves around medications and solutions, but at least once a day, a user posts a disturbingly suicidal message. The developers noticed it, and every five days they repost a long message listing mental health resources.

At least once a day, a user posts a disturbingly suicidal message.

But some users complain that the Period Tracker social boards are strangely limited. There’s boards for discussing TV and movies, but there’s not a whisper of abortion, LGBT relationships, or survivors of sexual abuse and assault.

“Why is there no group or sub-category about STDs? Not that I have them, but it seems odd… [STDs are] one of those things I feel like women need support around,” said Getty.

And since one in five college women are victims of sexual assault, the lack of a support system for sexual assault survivors is glaring. One user posted in the Depression group: “Why can I never get water hot enough to burn the feel of his hands on my body off?”

On the lighter side, women have suggested ways to improve on the ultimate period app. This Jezebel piece, for instance, calls for apps that “reward you for keeping track of your cycle by letting you unlock virtual prizes,” such as a hormonal advent calendar. The piece laso suggests the term “Friendometrium” for unlocking an achievement every time your cycle syncs up with a friend’s.

User Katie Rempe, 31, said she uses P Tracker to “remind me to keep tampons in my purse” but also wishes it went just a little further in terms of interactivity.

“If it sent me a text three days before my period is supposed to start, that would be nice,” Rempe said.