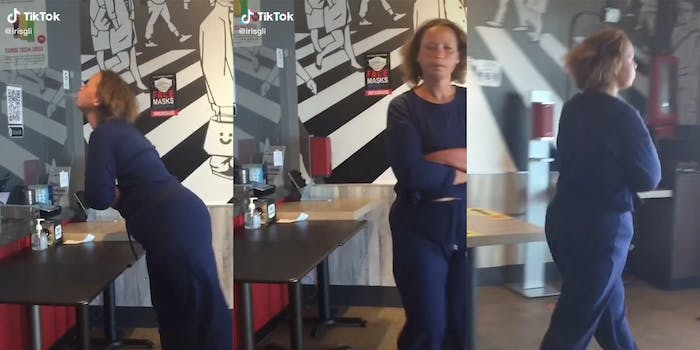 'This isn't the first time she's done it.'

A viral TikTok video shows an anti-masker woman spitting at employees at a hot dog shop on Tuesday in San Jose, California. The woman, who has been dubbed a “Karen,” has made national news as people attempt to find her.

User @alilseuli first uploaded the brief video to TikTok. It shows a woman inside of Umai Savory Hot Dogs with her arms folded. She suddenly spits in the direction of shop employees, allegedly after refusing to wear a mask. The employees were protected by a plexiglass barrier.

“You just have to be plainly disrespectful to spit at someone for asking you to follow simple rules,” Kristine Nguyen, an Umai employee, told KABC-TV.

However, it appears that the spitting woman is something of a regular phlegm thrower at the location.

Michelle Contreras, another employee who saw the event, KABC-TV: “This isn’t the first time she’s done it. She did it to two other co-workers not so long ago. And she’s done it to our next-door neighbors.”

The store’s owner told the station he was reluctant to file a report. Given her behavior, there’s a possibility that the woman has mental health issues. Bringing police into situations requiring mental health support can escalate to violence.

“I don’t condone these types of behavior,” Dat Thieu said. “But at the same time, I don’t really understand everybody’s circumstances. And you know, I don’t want to make things worse for people than, you know, what they already are.”