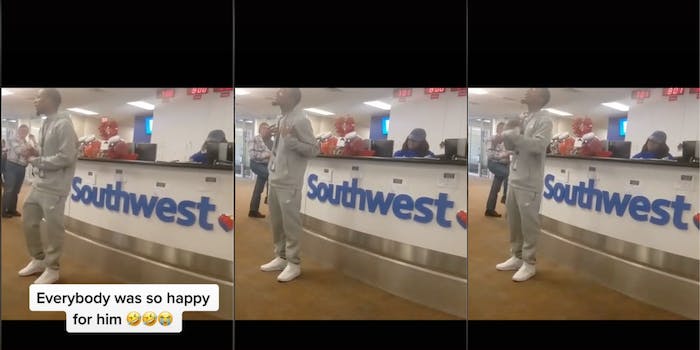 'I better get my bonus check too.'

The video, which has over 3.1 million views, was posted by @jvoguee with the caption, “I don’t know who this is, but if he ever sees this, I need a STORY TIME 🤣🤣🤣🤣 THIS HAD ME CRYING.”

The overlay text reads, “The most savage way to quit a job.”

“Come on guys, my name is Gregory Watkins, and I’ve been with the company for ten, well, next month with make it ten years,” he starts, before getting a few claps.

The overlay text sets it up: “Everybody was so happy for him.”

He then explains he was written up by Southwest leadership for a “15-minute tardy.”

“So I’m just here to say, ‘fuck y’all, I quit, and I better get my bonus check too,'” he commences, with the crowd in shock.

A woman commented, saying that he knew Watkins: “This is my coworker Greg, yes I was at work that day!!! He’s very quiet, very kind. This was shocking and very memorable.”

The poster replied, “I knew he didn’t do this just bc of one thing. I’m sure he was dealing with more than that 15 mins.”

However, while he appeared to film his quitting to make a point, a few people thought Watkins’ priorities were backward. One commenter wrote, “You should have got that bonus check first!

Another said, “Don’t quit. Let them fire u, bro. Get your bonus and unemployment.”

Hopefully, Watkins had a solid plan after quitting Southwest Airlines.

The Daily Dot has reached out to Southwest Airlines and the TikToker who posted the video for more information.