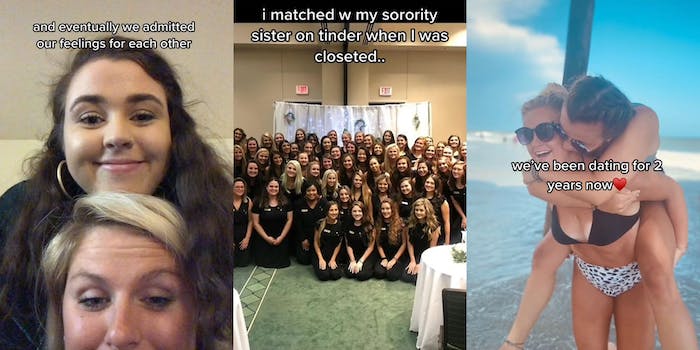 ‘Coming out is scary, but it’s worth it’: 2 sorority sisters fell in love, and inspired others to come out as openly queer

'I fell for my little before I even realized I was gay. We dated for 4 years.'

A love story between two sorority sisters has tugged at TikTok’s heartstrings.

The story of their initial attraction, coming out, and the road to acceptance has reached over 150,000 views. Now, other users are commenting their stories of similarly finding queer love in college.

In the video, user @yattertotter explains she matched with another girl in her sorority on Tinder, although she was still closeted at the time.

Neither of them acknowledged the match, however, an organic connection began to grow.

Eventually, they admitted their feelings for each other and dated at first in secret. When they did come out, they were elated and met with support from their fellow sorority sisters.

Now, they’re an inspiration for others as @yattertotter mentions other girls in their sorority have come out as queer.

“Coming out is scary, but its worth it,” the overlay text reads.

TikTok users poured out their support for the couple and many shared that they too found partners in the traditionally conservative environment of greek life.

”The same thing happened in mine. It’s a ripple effect but it’s nice because everyone became who they were meant to be and we embraced them,” said @123jimmyneutron

“Moving in w my sorority sister turned girlfriend in 3 months! unrelated but i’m the reason most sororities at my old college have a no dating policy,” commented @k8istryingtheirbest.

“I fell for my little before I even realized I was gay. We dated for 4 years,” shared @lindsnewmxx.

The Daily Dot reached out to @yattertotter via Instagram direct message.