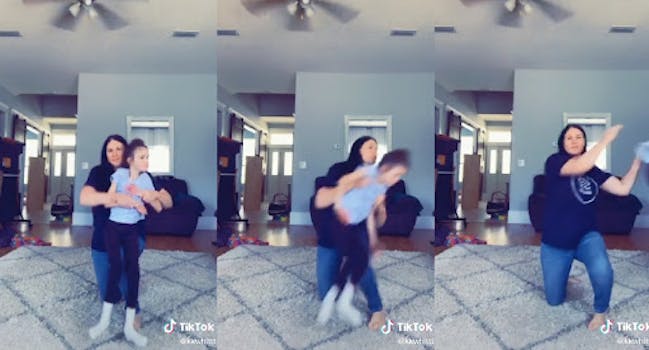 Viewers were stunned—but the family says 14-year-old Abbie is fine.

Across TikTok, users are dancing to “Something New” by Ty Dolla $ign featuring Wiz Khalifa. Even celebrities such as Jennifer Lopez and Ciara hopping on board.

But some viewers were astonished at one family’s “Something New” TikTok. The video shows a mother tossing her teen daughter, who has a genetic disorder that causes intellectual disabilities, off of her lap.

“I’m like, ‘How wholesome! They’re all dancing (togeth—) OHMYGOD SHE THREW HER DAUGHTER!” one user commented.

The TikTok features the Whitaker family from Jacksonville, Florida. Kim Whitaker and her husband Lee, along with their eight children, participated in the dance challenge. Toward the end of the video, Kim can be seen helping her daughter, Abbie, with the dance. Then, she tosses Abbie from her leg.

So far, the video has racked up at least a million likes, attracting a plethora of comments.

Others posted their reactions to the video on Twitter.

Kaylee Whitaker, 22, told BuzzFeed News the family saw the trend as “something fun to do as a family during this quarantine.” She assured viewers she was present to catch Abbie and that her sister had no issue with the TikTok.

Their mother, Kim Whitaker, said Abbie “loves to be tossed just like any other child.”

“She has been my daughter for 14 years, and I know her better than anyone,” Whitaker said.

The family told BuzzFeed News that TikTok previously took down the video—as of Wednesday afternoon, the video shows up twice on the family’s TikTok account—but Tiktok disputed the claim.

According to BuzzFeed, a TikTok spokesperson said the platform did not receive any request for the removal of the video.

Despite the shocked reactions to their take on the “Something New” challenge, the Whitaker family has continued to post on TikTok and recently participating in the Flip the Switch challenge.

Kaylee Whitaker told BuzzFeed News the family understood people’s response to their “Something New” video but reassured viewers that her sister was in good hands.

“We are thankful for the comments of the people who stood up for us,” Kaylee told BuzzFeed News. “We do know that some people are genuinely concerned, and we want to assure them that she is well taken care of.”