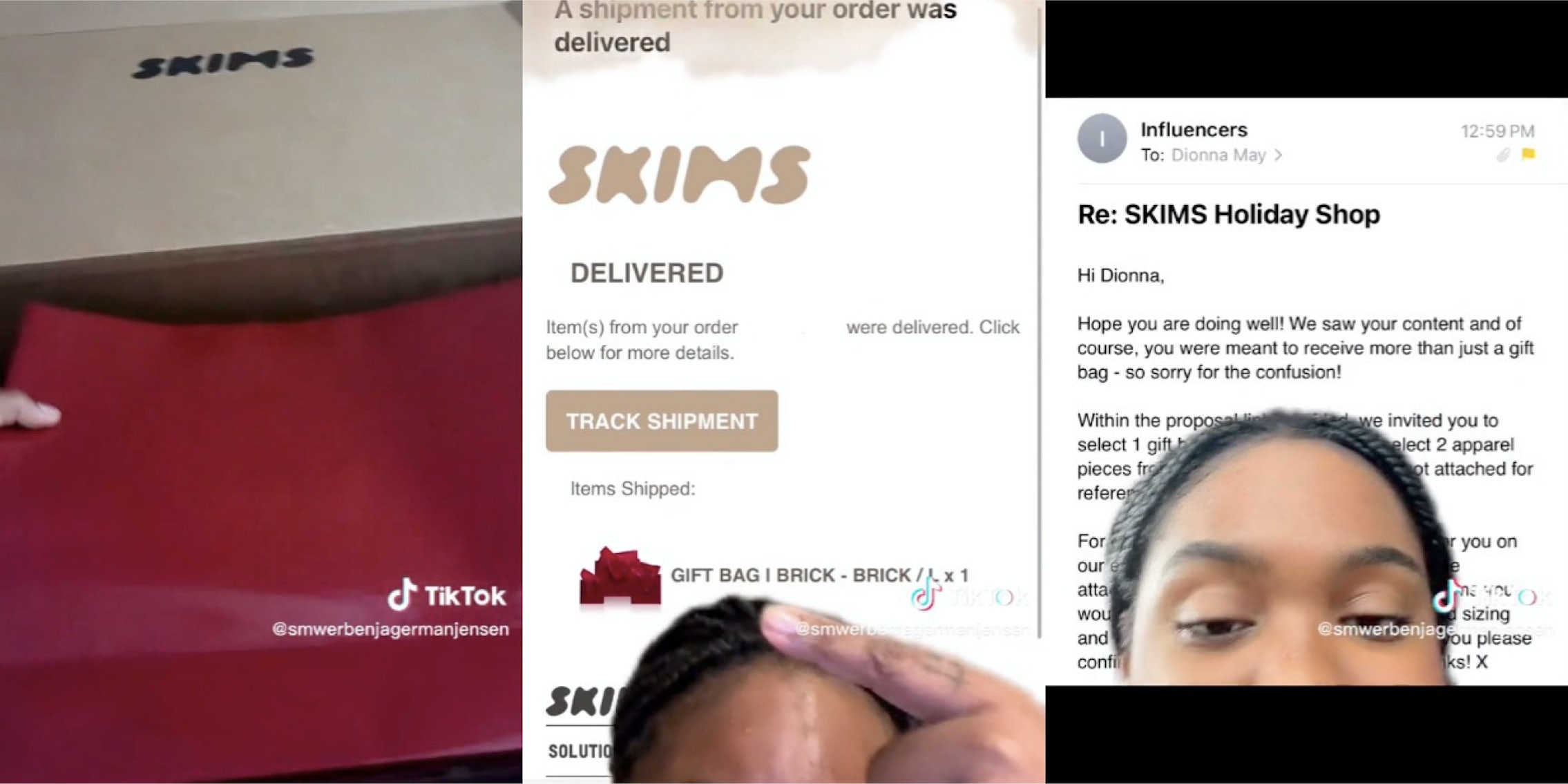 ‘How am I supposed to make content with that?’: Content creator says Skims sent her an empty gift bag as PR

'Who's going to Skims just to buy the gift bag?'

As an online content creator, it’s always a welcome surprise when a brand offers to send you free items.

Brands do this both to reward loyal customers and to increase visibility. Concerning the latter, the hope is that the creator will show their newly received items on camera, thus bringing more attention to the brand.

However, sometimes, this attention isn’t always the kind that the brand would have liked. One such case recently went viral after being posted to TikTok by user Dionna (@smwerbenjagermanjensen).

Dionna says that Kim Kardashian-owned shapewear company SKIMS reached out to her to ask if she wanted a free gift bag. After the bag is delivered, she realized it was just that — a bag.

“Granted, it’s a nice gift bag,” she says in the clip where she shows the red gift bag. After looking at the bag further, she laughs. “Maybe something went wrong, because this can’t—this isn’t right, right?”

The video currently has over 1.5 million views.

In several follow-up videos, Dionna says that she isn’t sure if she made an error or if the company messed up.

That said, she notes that the tracking information did simply list the item as a “gift bag.”

“Granted, I knew what it was before they sent it to me because they asked, but I thought it was going to be gifts in the gift bag,” she details.

In the comments section, some users speculated about how this could have happened.

“I bet this was their plan to make this go viral and make it a whole thing,” a user offered.

“They did want you to promote it for Christmas gift wrapping?” another suggested. “Lol that’s the only thing I can think of.”

“They want you to do what influencers do with designer shopping bags,” a third claimed. “All those holiday gift hauls be full of empty designer bags.”

“When I worked in PR it was the assistants and interns that handled influencing gifting. It was probably a mistake,” another TikToker explained.

According to a follow-up TikTok, it seems this was a genuine mistake. SKIMS reached out to Dionna and told her that her bag was supposed to contain items of her selection, which it clearly did not.

While Dionna says she thinks she followed the company’s instructions, she admits she cannot be sure. Regardless, she says she probably will not accept the free gifts, but thanks all of her viewers for following along on her journey.

Commenters insisted that she accept the gifts.

“Girl you better take it,” echoed a second. “It was a small mistake and now you can stitch the original mistake vid when you get the new products.”

We’ve reached out to Dionna and Skims via email.